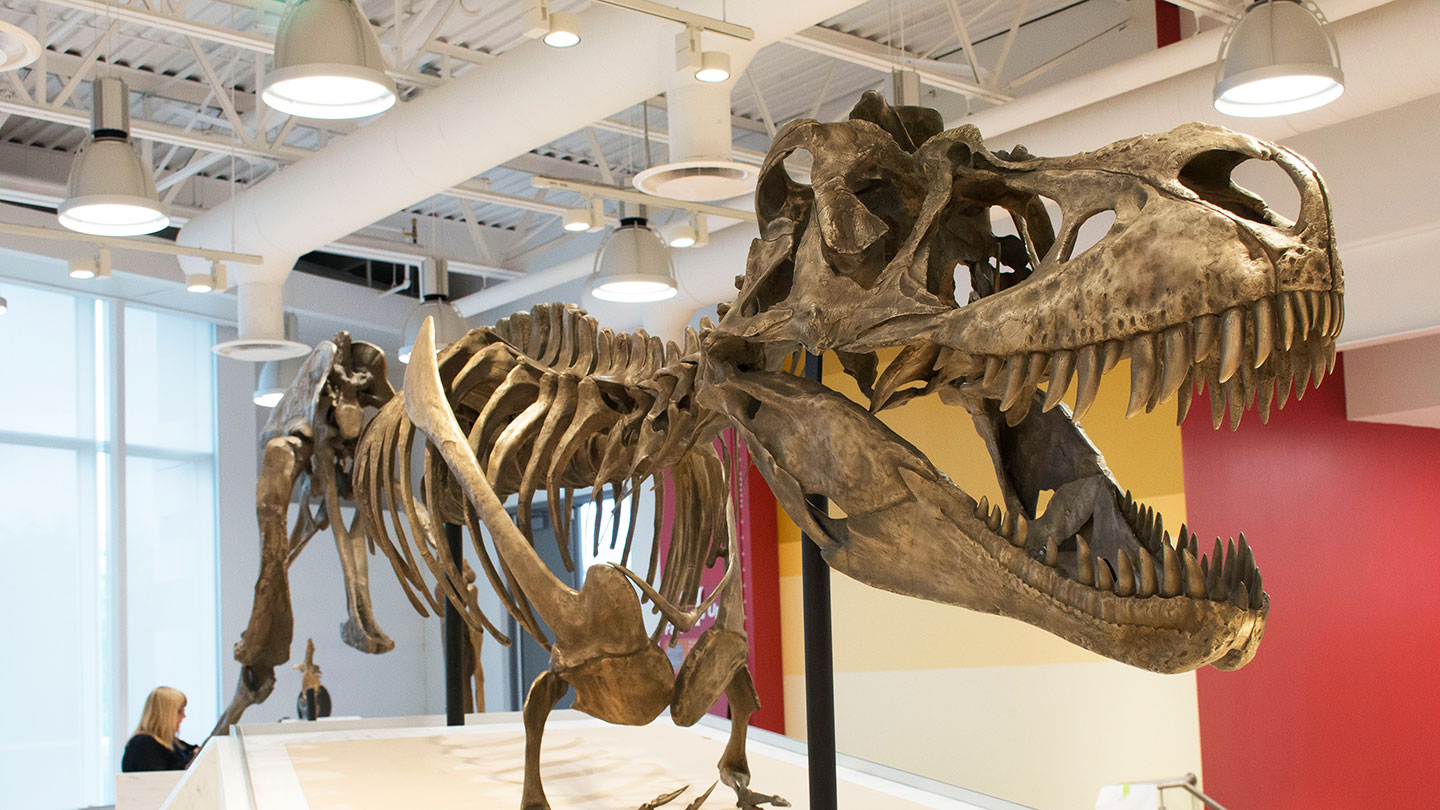 Get to know Alberta’s Own Frightening and Fascinating Prehistoric Predator

It’s no secret Alberta is chock-full of prehistoric gems. Dinosaur Provincial Park is one of the world’s richest fossil sites, and the Royal Tyrrell Museum of Palaeontology in Drumheller is regarded as one of the best. People began discovering fossils in Alberta back in 1884. What was the first? The partial skull of an Albertosaurus. That’s right, Alberta has its very own dinosaur.

Dr. Donald Henderson, Curator of Dinosaurs at the Royal Tyrrell Museum, shared some facts about Albertosaurus that’ll get you up to speed before your next adventure in the Canadian Badlands.

Albertosaurus hung around these parts during the Late Cretaceous, so roughly 72 to 68 million years ago. This means it predates T. rex, which lived in North America 66 to 68 million years ago. A full skeleton has never been discovered, but Dr. Henderson says there are enough specimens around to help researchers get well acquainted with Albertosaurus.

Another fun fact: Albertosaurus was discovered by Joseph Burr Tyrrell, namesake of the Royal Tyrrell Museum. 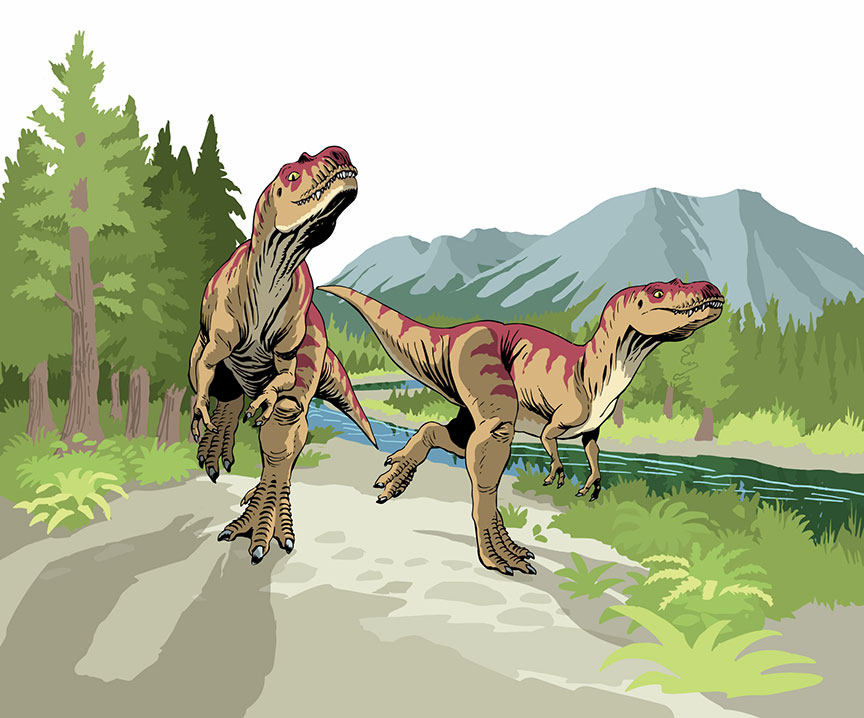 A full-grown Albertosaurus was smaller than a T. rex, but you still wouldn’t want to cross one. They ranged in size from 6 to 8 metres long (19.7 ft to 26.2 ft). In comparison, a full-grown T. rex was 12 metres long (39.3 ft). Another way to tell the two apart? Albertosaurus had small crests above its eyes and small spikes just above its jaw.

“The young would have had feathers, a downy covering,” Dr. Henderson explains. “But once they got above a certain body size they would be at risk of overheating, so they would lose the feathers.”

Those cute little feathers were gone within the first year or two. After that, they had a mega growth spurt and reached adulthood at about 18 years of age. And they didn’t just grow, they changed shape too. 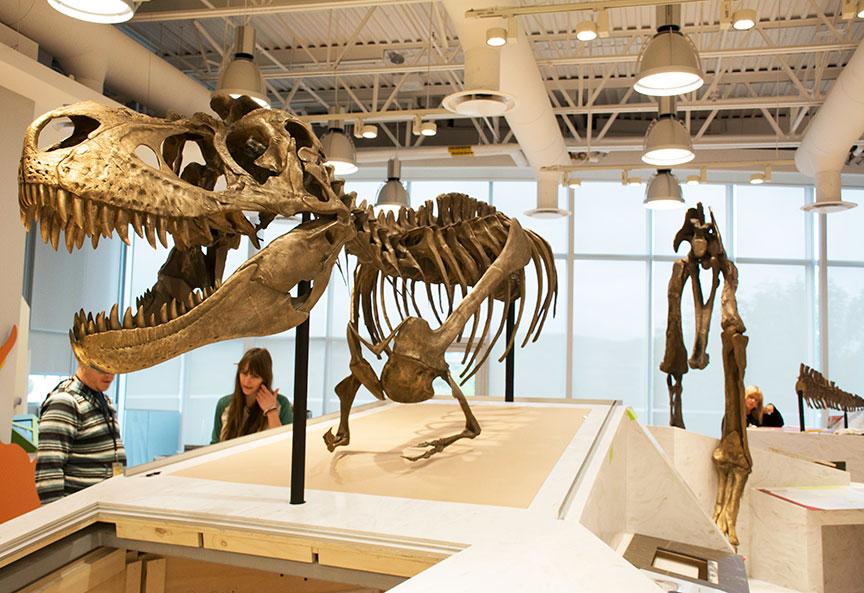 “We know that they had a huge [hunting] range,” Dr. Henderson says. “Meat is meat, so predators can go anywhere they want.”

The existence of Albertosaurus in the province also impacted the other types of dinosaurs that could exist in the same location.

“Wherever you get a large predatory dinosaur, you don’t get any smaller things,” Dr. Henderson adds. “We had other small feathery things, like Atrociraptor, but they stayed small. They didn’t fill in that intermediate-to-large predator size. That’s where Albertosaurus and its teenage and sub-adult forms filled in the bigger picture.” 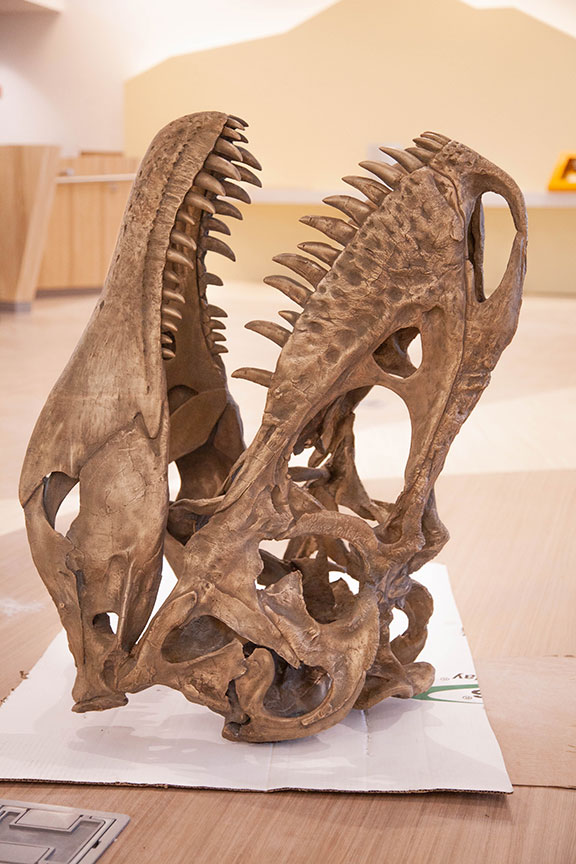 Where to visit one

You won’t find any living Albertosaurus roaming the Canadian Badlands these days. But you can learn all about them in the new Learning Lounge at the Royal Tyrrell Museum. The dino’s been immortalized as a life-size bronze cast, so you can get up-close-and-personal. Even better? The dinosaur, which is broken into three sections, is designed so you can crawl under it and interact with it in ways you never could with a skeleton.

The Learning Lounge is found halfway through the museum, and it’s really your introduction to dinosaurs in your journey through time. Plus, it’s a good pit stop if you’re in need of a snack break before moving on.

While you’re there, try out the interactive exhibits. Dr. Henderson played a key role in developing the content in the Learning Lounge. You can put on a viewing machine to see and hear what other dinosaurs would have and – Dr. Henderson’s favourite – Build a Dinosaur.

“We have eight different animals chopped into four chunks. You get to mix and match, and the system will tell you, ‘Is your animal viable or not?’” he says. “There’s enough to keep four-year-olds to 80-year-olds entertained.” 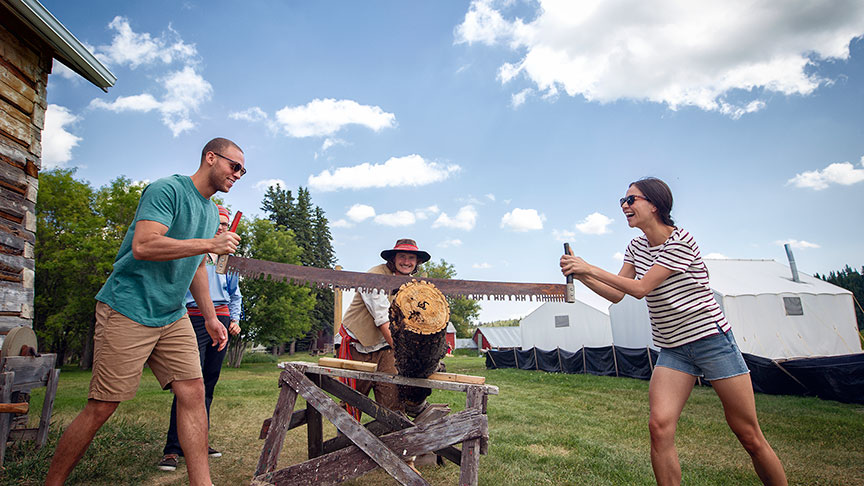