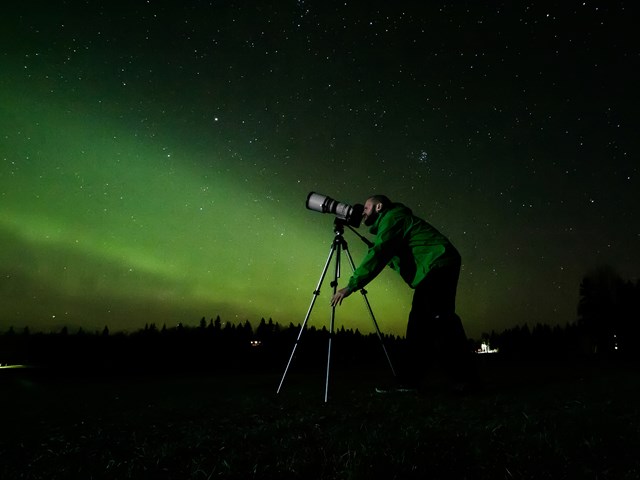 In my mind's eye, I can see the hungry people and hear the howl of the winter wind. Suddenly, a pack of wolves appears. I watch as they teach the tribe how to work together, how to hunt and what to eat. Come spring, the tribe will be strong and the wolves will be gone, but I will still see them working in harmony – high overhead in the night sky, along the Wolf Trail.

I am deeply moved by the Indigenous legend of the Milky Way. Gazing upward, it seems like the centre of our galaxy is rising straight up from the Athabasca Glacier. In the heart of the world’s second largest dark sky preserve – Jasper National Park – I pull my coat a little closer and resume my stargazing. Look! There's the Hunter and, there, the Seven Sisters.

Leave the City Lights Behind

Under the ambient glow of city light, it's impossible to see more than a handful of stars. Not so in a dark sky preserve, free from artificial light, where star systems wheel freely across the night sky and modern civilization seems but a dream.

Now it's late August in Cypress Hills Interprovincial Park in southeast Alberta, and the Summer Star Party is in full swing. We wander off to lie on our backs in the meadow, looking for familiar constellations, just like we did as kids. This place has the highest elevation in the country east of the Canadian Rockies and the night skies are spectacular.

At summer’s end, we'll meet up with the Edmonton Centre of the Royal Astronomical Society of Canada (RASC) in the Beaver Hills Dark Sky Preserve, about 40 minutes east of the city, to peer through telescopes at galaxies millions of light years away. Soon Waterton-Glacier International Peace Park, which spans the Canadian-US border, will have received its RASC dark sky designation and we can take a trip down there. Wood Buffalo National Park, in northern Alberta, has its designation now, eclipsing Jasper as the world's largest. That’s on the bucket list, too.

The Sky's the Limit

We've decided to join the Calgary Centre of the RASC for monthly meetings and star parties. Their big one is held annually in early September near Drumheller in the Canadian Badlands. And there are lots of open houses throughout the year at University of Calgary's Rothney Observatory, located about 40 minutes north of the city. The kids are already in love with the planetarium/digital dome at Telus Spark, Calgary's science centre.

When we head up to Edmonton, we'll visit the University of Alberta's campus observatory and the Telus World of Science. And if we time it just right, we can take in the free public talk at the monthly meeting of the Edmonton Centre RASC.