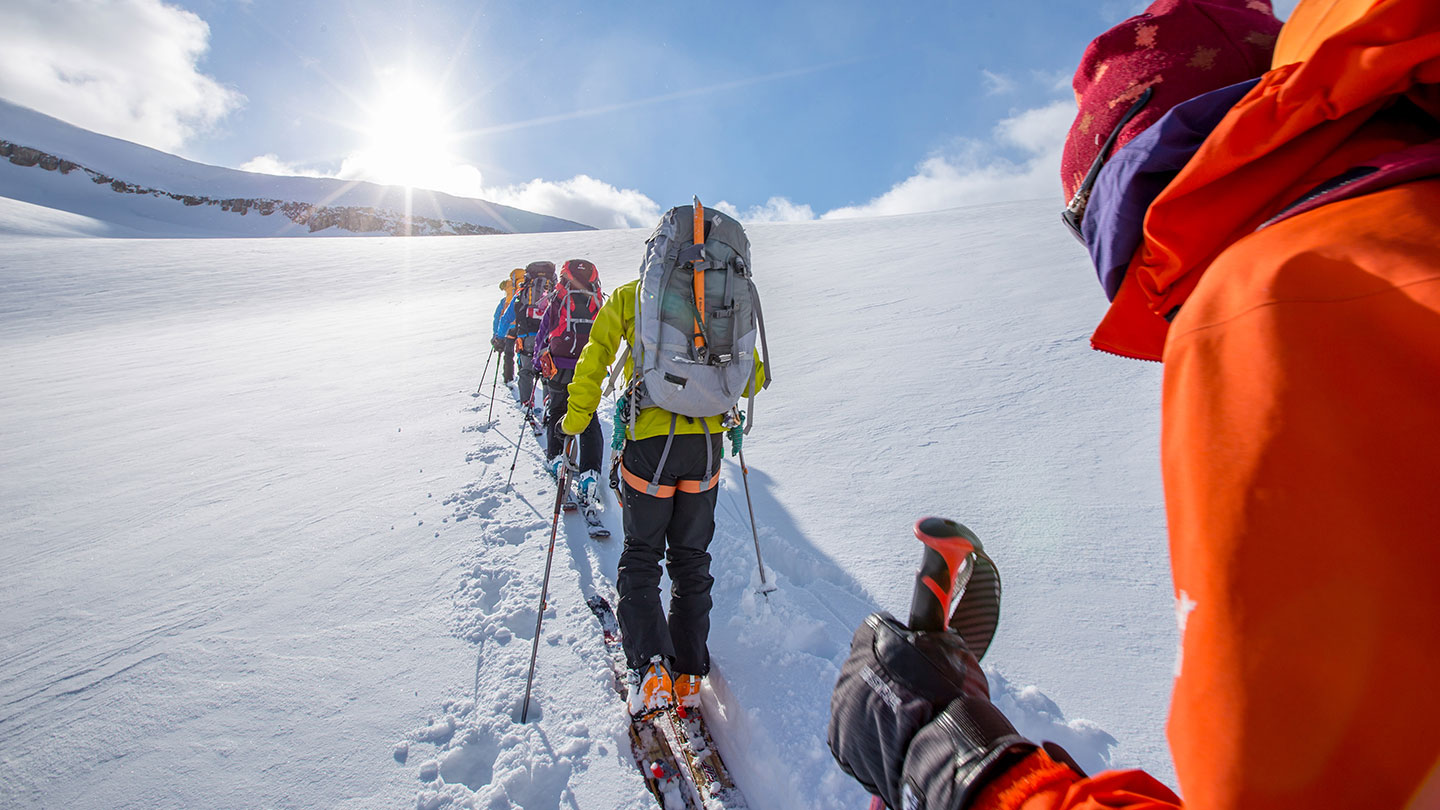 This backcountry rookie completed an iconic Alberta alpine trip, and knows how you can do it too

With ski boots on, I step into my climbing harness. Jim Gudjonson, our mountain guide, hands me a rope and I clip in. There’s no going back now: I’m committed to climbing the peak of Mount Olive.

Behind me, my husband Mike clips in and we’re off, kicking boots into the wind-crusted snow atop the ridge. On one side the mountain gives way to the glacier far below. The other side? The same thing. Oh my.  Thank goodness for this rope. For Gundjonson. For the courage pill I swallowed this morning.

Photographer Ryan Bray captures the wildness of the Wapta, but also finds a trip loaded with cameraderie, friendship and beauty. Video by Adam Greenberg

I’ve always loved summer mountain adventure. Then Mike bought me backcountry skis. “It’s like hiking in the winter,” he said. We took our Companion Rescue course and began ski touring. A new world of white appeared.

This year we had the impulse, like the adventurers of old who have long been drawn to Alberta’s mountains. But winter holds risks: traveling over glaciers, hidden crevasses and route-finding in blizzards. We’d need guides. Luckily, this province is stocked with experts itching to take people out. Has been for over 100 years.

We decide to test our mettle on the Wapta Traverse, a multi-day ski mountaineering adventure that is one of the iconic trips of Alberta’s backcountry. We’d be gliding across glaciers and climb-ing peaks — things we’d never done before. Was I nervous? Heck yes. But I knew I was entering an Alberta tradition. The Alpine Club of Canada (ACC) has been helping climbers access the wilds since 1906, and members have built huts in some of the province’s highest, farthest and most achingly gorgeous terrain.

We’ll be in the experienced hands (or tracks) of mountain guide  and apprentice ski guide Alison Cardinal. Lawrence White, the ACC’s executive director, is coming to share the legend of Alberta alpinism.

Sound intense? It does to us. But we both take a big gulp and go for it. 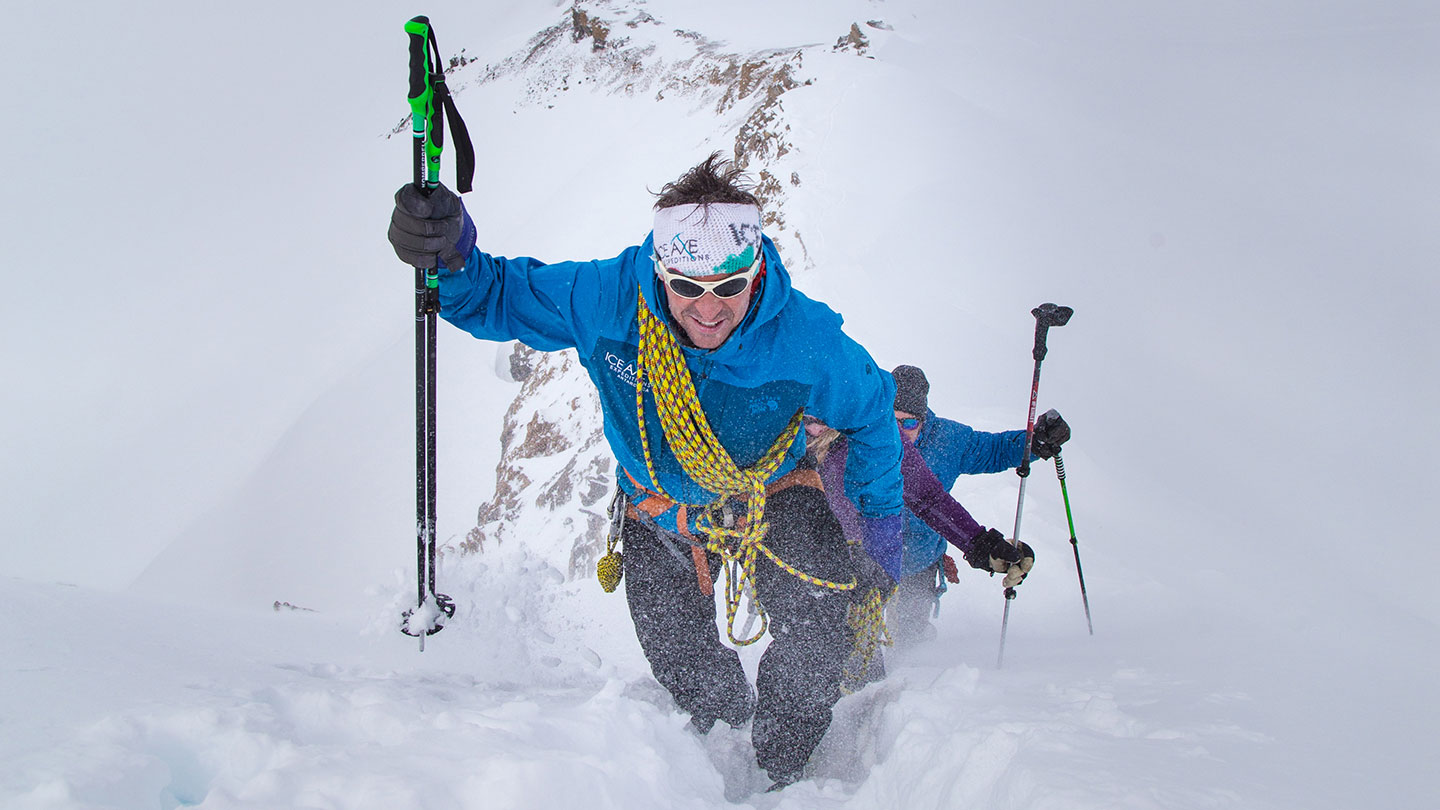 A guided trip along the Wapta Traverse gives backcountry skiers a chance to enjoy the serenity of the alpine. It will make you sweat, too. Ryan Bray.

I don my pack and follow Gudjonson across frozen Bow Lake.  Our route takes us through the stone walls of Bow Canyon and into a new world. We move quickly to avoid overhead hazards. I’ve never been beyond the front slopes of these mountains and my heart’s pumping fast. We climb past Bow Falls and say goodbye to the last hardy fir trees. We are entering the alpine zone. Cardinal points out our destination of Bow Hut on a ledge high above. We’re sweating and pant-ing (well, Mike and I are). When we arrive we claim top bunks in the dorm like excited kids.

Want to know what hut life’s like? Grab some pails and fill them with snow. Melt the snow on the propane stove and rehydrate. Be a good hut neighbour and melt extra to share. Hang your damp clothes on the racks above the wood burning stove. Then kick back and get to know the other travellers gathered around the group tables. There’s no better way to make friends.

Gudjonson’s been guiding for more than 20 years. Think classic mountain man. The strong, silent type. He may be the only human who can pull off a crocheted headband. He’s guided worldwide and his favourite thing is the Alpine Club’s annual General Mountaineering Camp. “I’m keen to go places people have never been,” he tells me in his quiet way. I ask if there are virgin peaks in Alberta, terrain that’s still wild and free.

“For some, it’s an eye-opener that this world up here exists,” he says. “There are lots of peaks left to discover.” 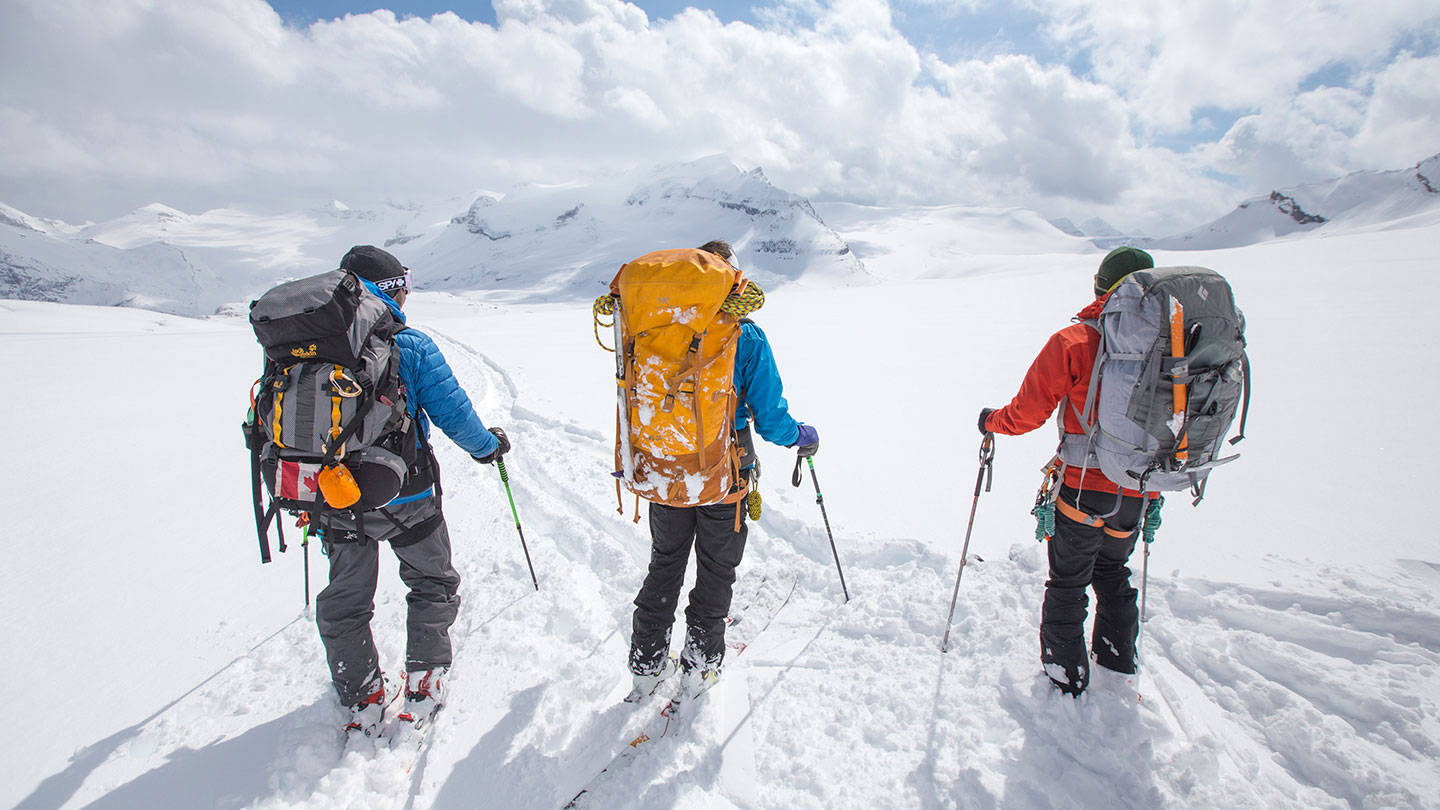 In a nutshell, backcountry skiing is the same as cross-country skiing, but you can go off the groomed runs and uphill. That means you can veer off the beaten tracks and get into some stunningly beautiful terrain. Ryan Bray.

We ski up the Bow headwall (sweat, pant, keep skiing), under Mount Thompson, then make fig-ure-eight turns to Peyto Hut. The snow’s like icing sugar.

Peyto dwells in mountain fairyland. It’s Cardinal’s favourite. “I love these views and there’s easy ski mountaineering from here,” she says in her endearing Irish accent. Cardinal felt the lure of the wilderness and came to Alberta in 2002. The mountains hooked her (and her husband Bill, who also works for the Alpine Club). She became a raft guide, hiking guide, Lake Louise ski patrol and is now an apprentice ski guide and mother of two boys. “I don’t do well inside,” she says with a laugh. She’s found the perfect job, and if you ski with her, you’ve found the perfect ski guide. She’s a powerhouse of energy with a fiercely beautiful goggle tan.

“The Wapta’s as beautiful as any place on earth.” 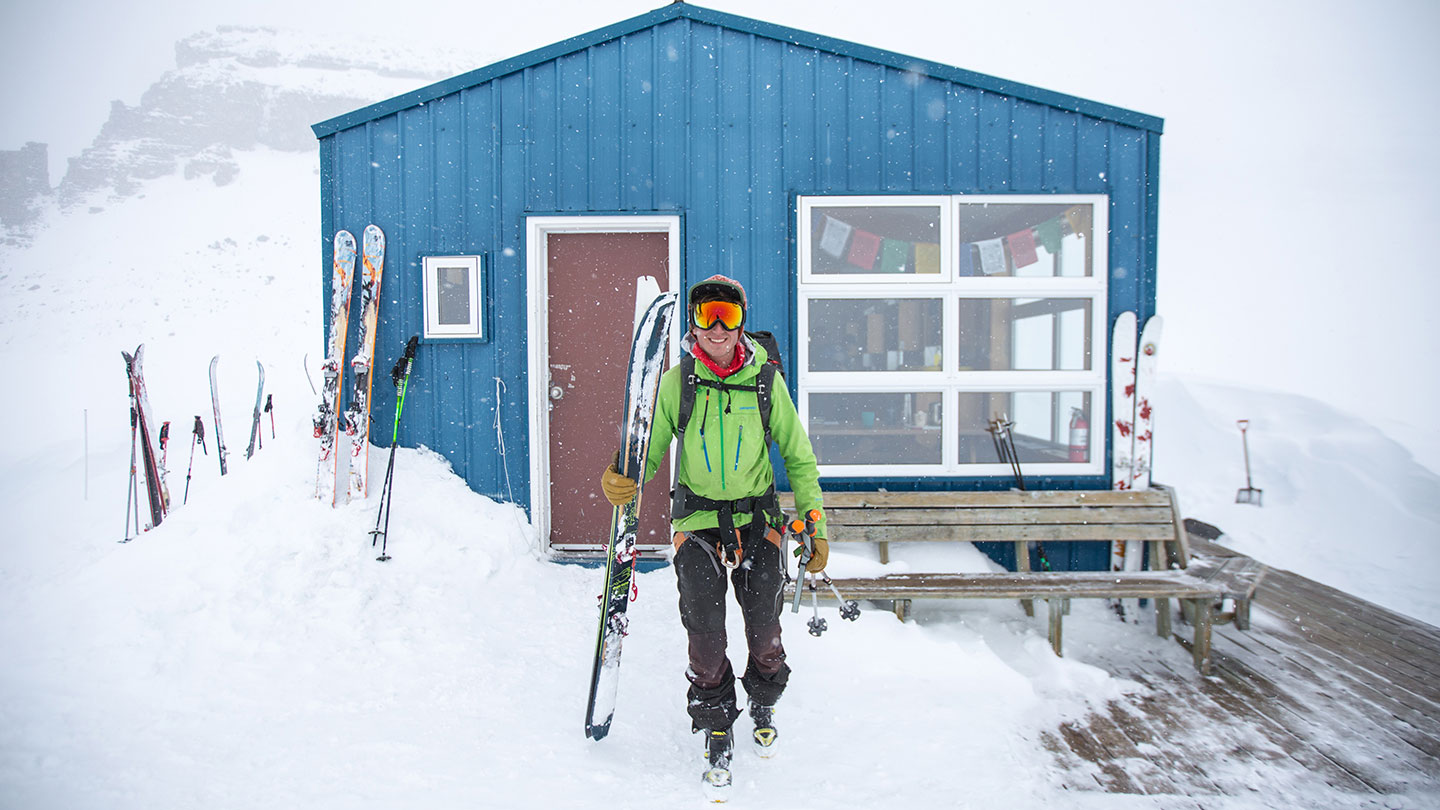 Bucket lists were made for experiences like the Wapta Traverse. Ryan Bray.

Have you ever been roped to a guide and ascended a peak? Me neither. That’s about to change as we approach Mount Olive. At a spot between St. Nicholas and Olive, we remove skis and Gudjonson ropes us together. I look up. And up. And before I have time for fear, Gudjonson starts kicking his boots into the ridge. This is pushing me beyond my limits. I must keep up or he’ll tug my rope. I use an ice-axe in one hand and pole in the other. On either side, the mountain drops into white abyss. We touch rock, and then there’s nothing but sky above. My first summit.

It’s these moments that stir the adventurer’s heart. My eyes scan the glacier and find nothing hu-man. This is what drew the first climbers. It’s why we spend weeks planning, years saving, to have five minutes on a mountain top that will change our lives.

At Balfour Hut and meet Neil Baker, an ACC porter who’d skied up food. Neil’s sinew and smiles, a person who reaches out a hand and becomes an instant friend. “These trips aren’t just for the hardcore,” Neil assures me as we tuck into our sleeping bags at day’s end. “I get to witness peo-ple seeing these places for the first time. That makes me so happy.” Neil recommends a nighttime trip to the outhouse for stargazing. I don’t have to go, but my sleeping bag is next to the window so I stick my head into the night. It’s so utterly silent I can hear the stars humming. 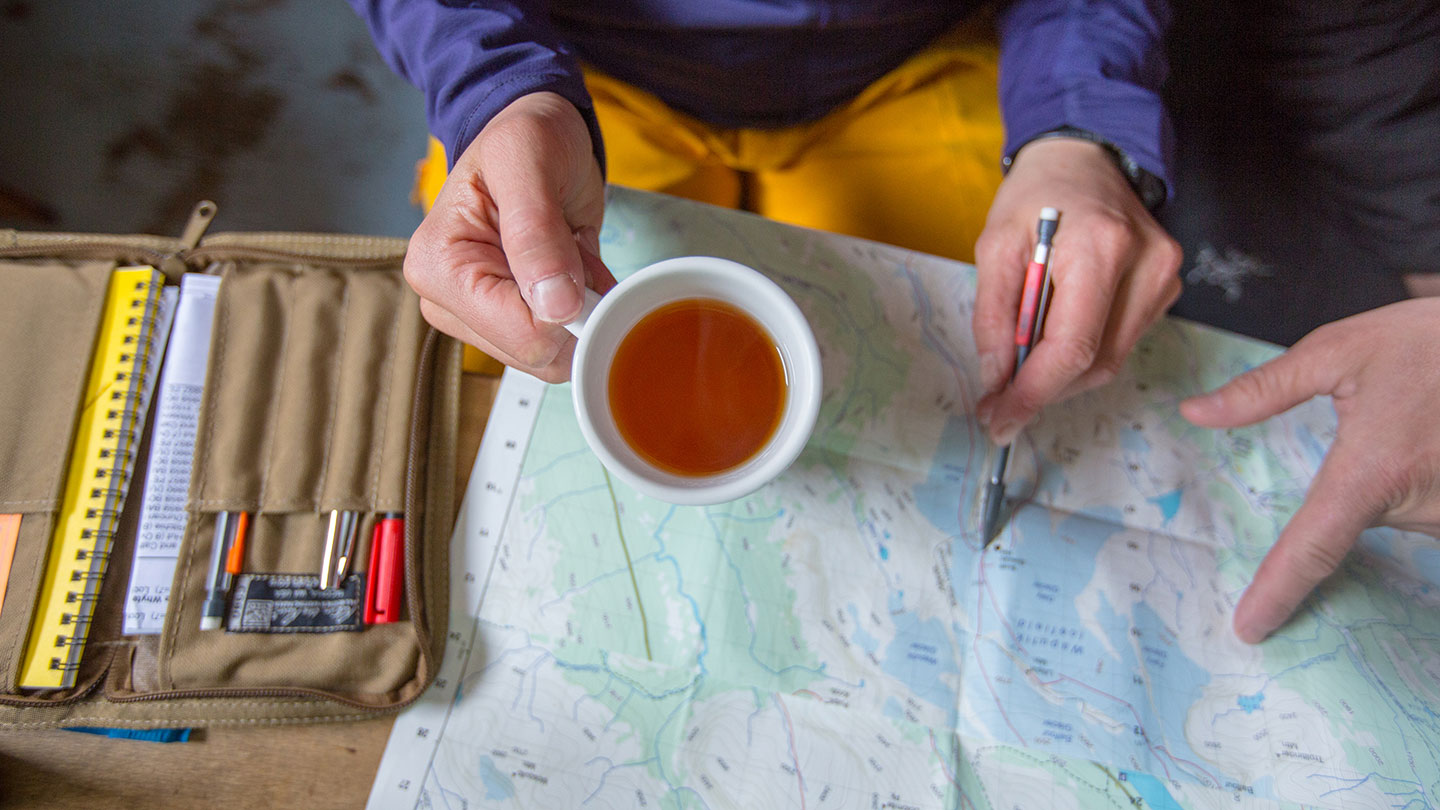 The Alpine Club of Canada has been guiding skiers through the mountains of Alberta for generations. So not to worry: it's very unlikely you'll be the worst skier they've ever seen. Ryan Bray.

We wake at 5:45 a.m. to attempt the crux of the Wapta, a spot named the Balfour high col. We need to pass through before the sun heats the glacier, which can cause pieces of the overhang-ing ice to break off (like Everest, but Alberta-style). Gudjonson and Cardinal break trail and keep us safe, never making us feel like the newbies we are. Everything is deliciously new. Sometimes, I’m so tired I’m not sure how I’ll keep going. But adrenaline flows in a steady stream and, some-how, I do.

We make it through, breathe a collective sigh of relief, then head to Scott Duncan Hut. It’s the smallest in the Wapta fleet and is so high, perched on the edge of Mount Daly, it’s easy to miss. We collapse into the bold sunshine to soak it all in.

Lawrence speaks of Alberta alpinism. “The annual General Mountaineering Camps we’ve hosted since 1906 change people’s lives,” he tells me. “People literally quit their jobs and become ski bums.” That’s what he did. He left Vancouver to work with the Alpine Club in Canmore. And it’s clear there’s no going back.

“Operating huts is part of our constitution. To provide refuge in alpine spaces. When people visit, it affects their entire social fabric: their health, their attitude — they’re jazzed!” 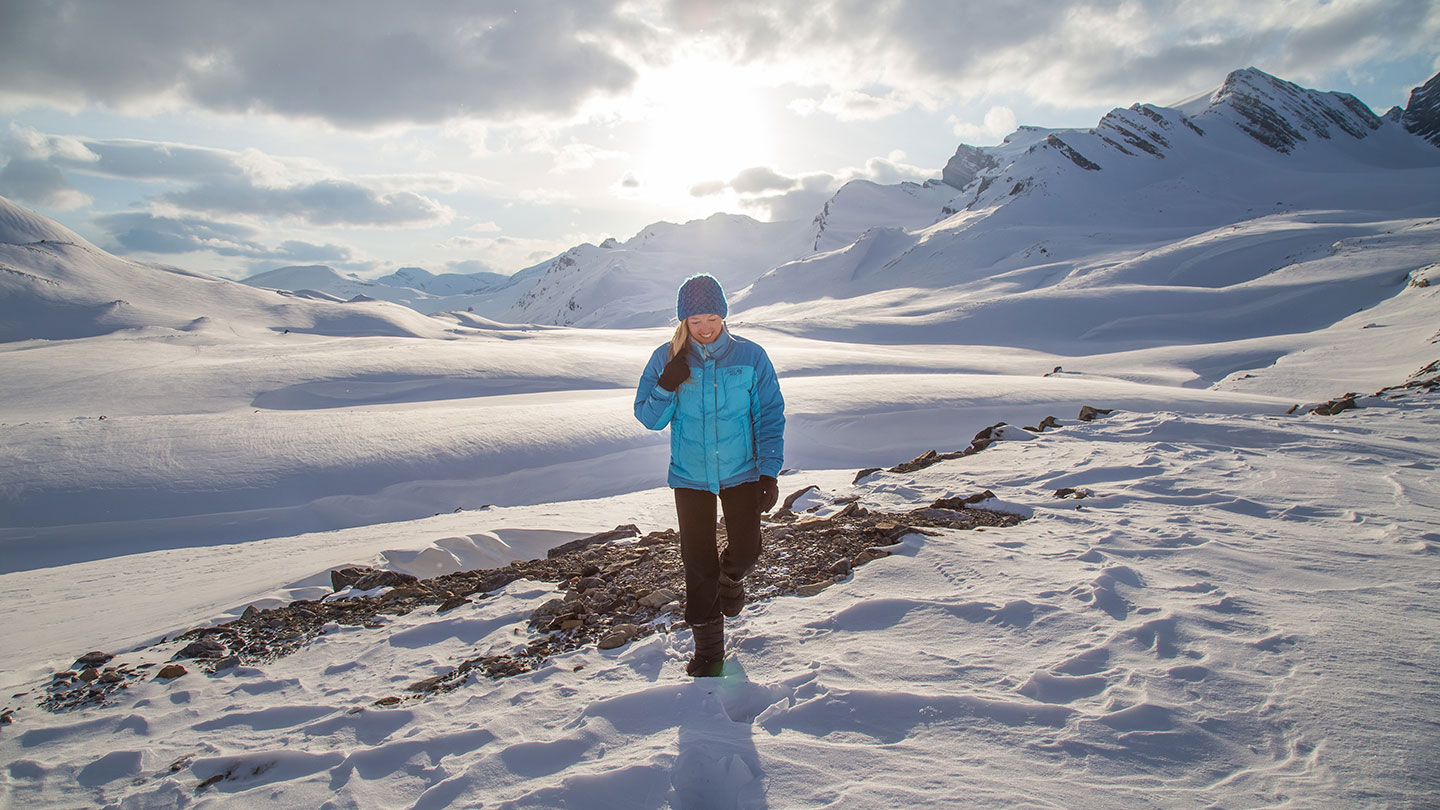 Skiers who complete the Wapta Traverse report feelings of bliss and satisfaction for finishing a gruelling trip into an area that few people get a chance to experience. They also report sore bodies, but in a good way. Ryan Bray.

After climbing past a cornice, we make our alpine exit. I see my first tree in five days. Soon we’re in the gentler world of vegetation. I realize I’m missing something. A piece of my heart is now bur-ied in the Wapta snow. I know it’s in good company with other adventurers who’ve skied there. Perhaps your heart will find a place there too. 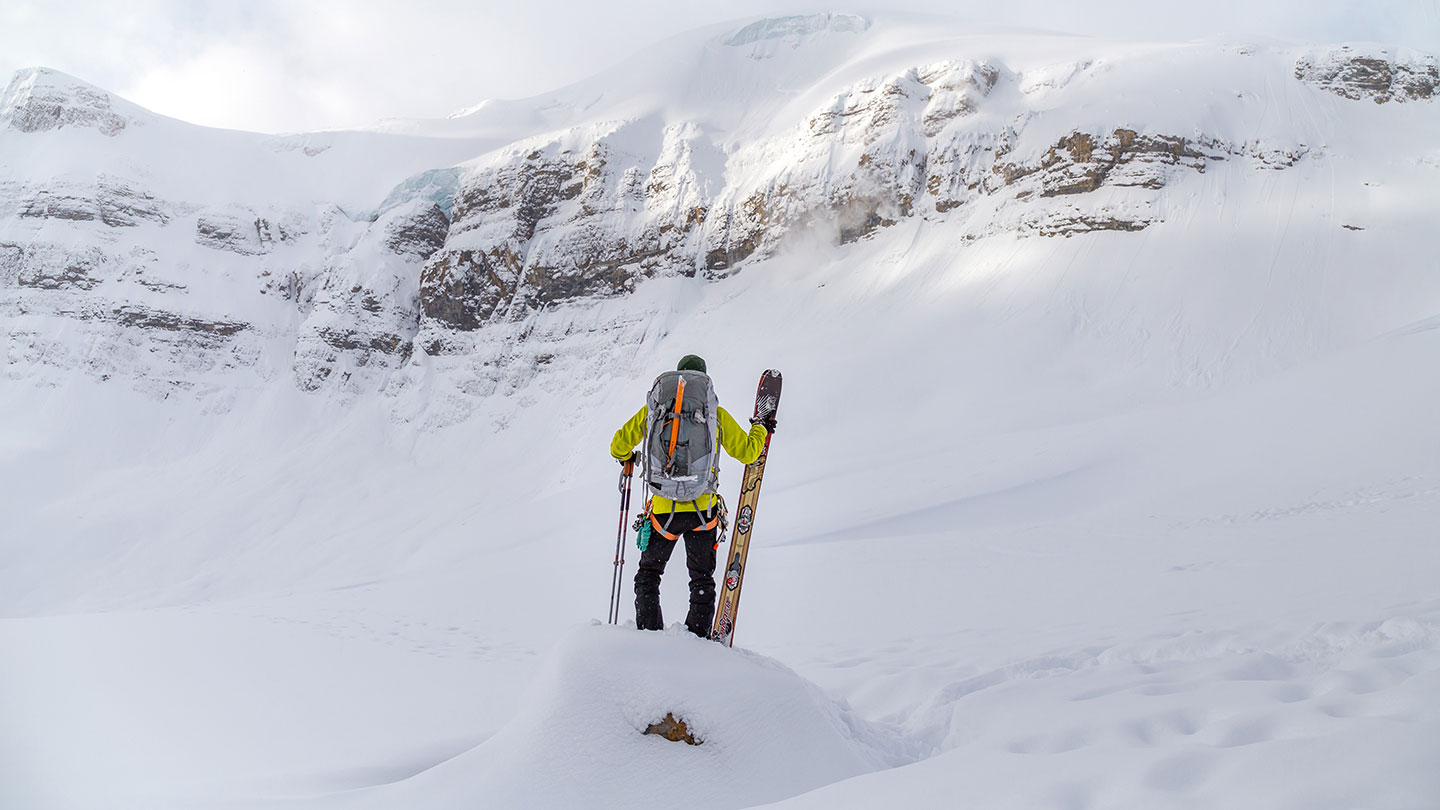 Backcountry sking can seem daunting, but a guide can help even those with a moderate amount of sking experience get started. Ryan Bray. 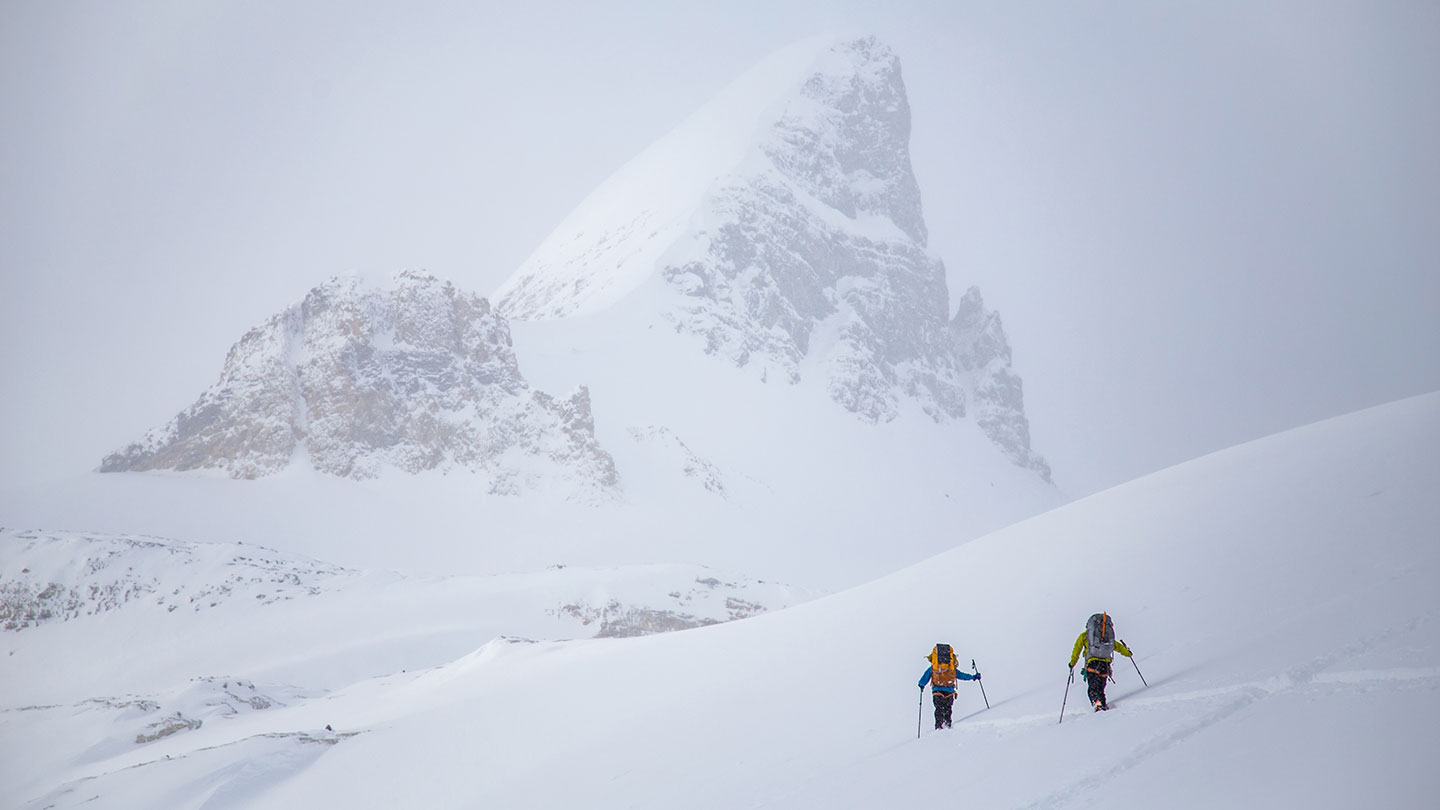 Alberta's mountains offer more skiing that what can be found at the resorts, although they are pretty great too. Ryan Bray. 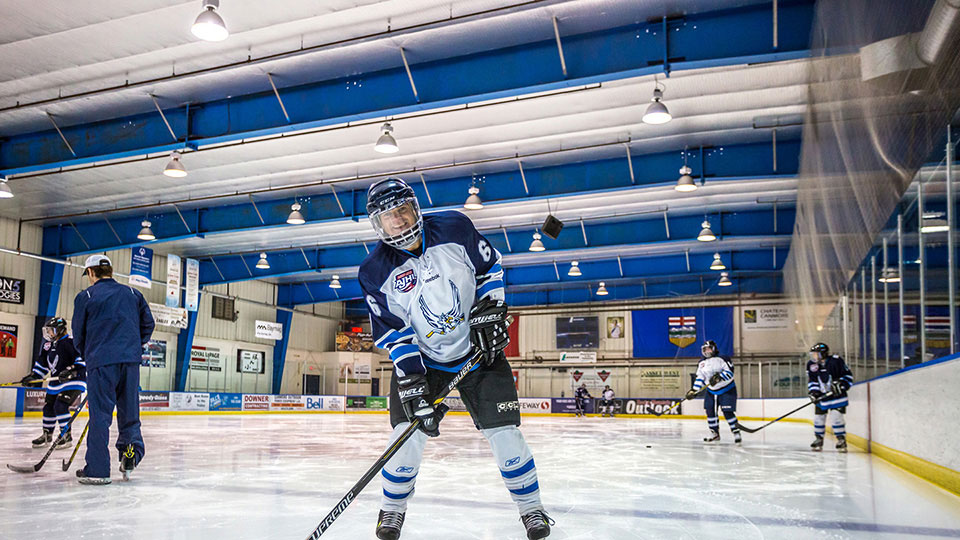