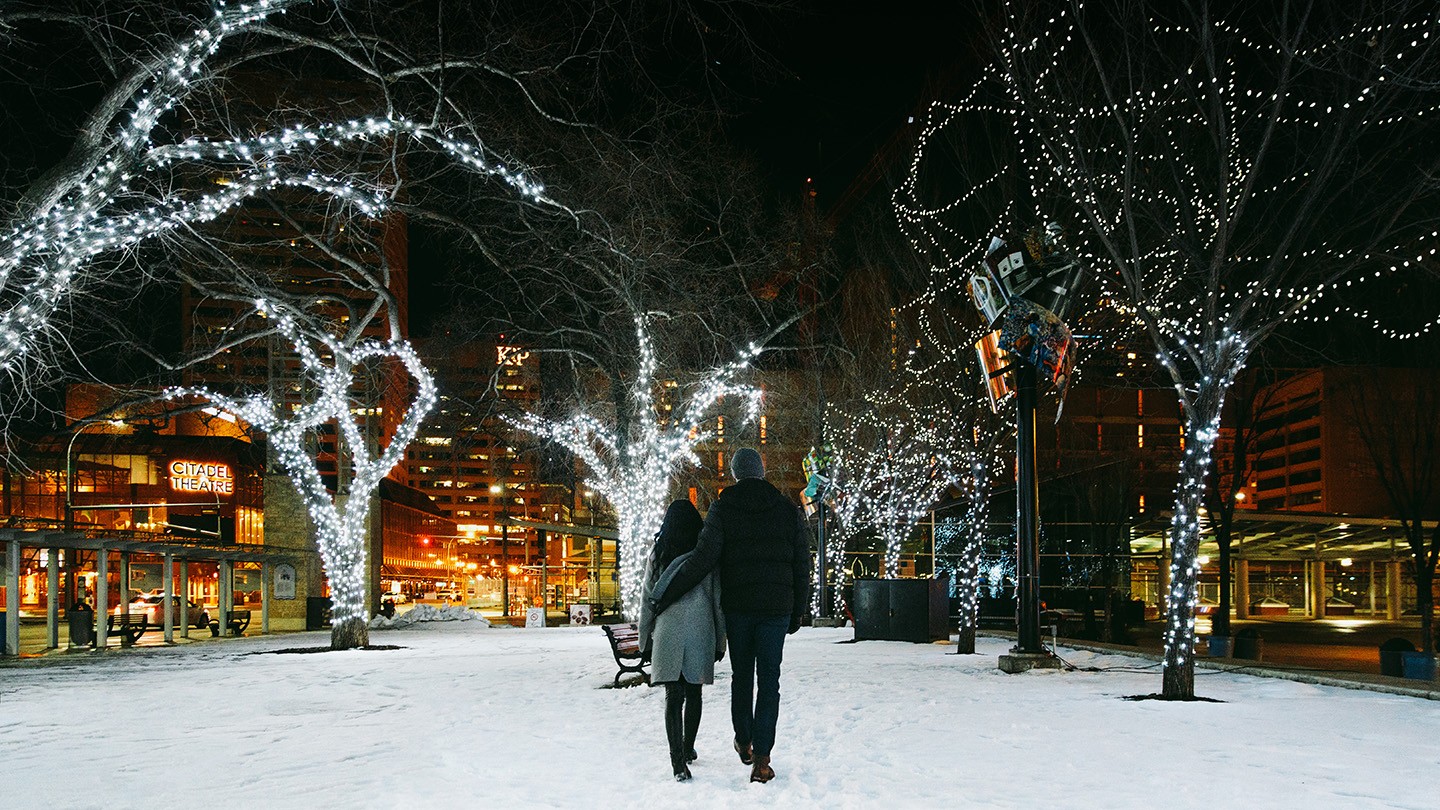 On a February night, steam and woodsmoke and voices rise from the Mill Creek Ravine, in central Edmonton. The central paths, around tipis and the indigenous singers, are busy with couples and children in parkas, hats and mitts.

Métis dancers are just up the way, with a live band, and in the quieter nooks public art bends and blends light, music, history, and politics with snow and trees and fire. Every now and then a few voyageurs, in pretend canoes and fake moustaches, holding tiny paddles, pass by to ask a series of absurd questions in English and French.

This is very, very Edmonton.

And not bad for reuniting with an old friend too.

Simon O’Byrne and his family are among them. He is vice president of community planning at Stantec, an Edmonton-based consulting company that started as a one-man office and now has 22,000 employees all over the world. At events like this one, O’Byrne is known as the co-chairman of the WinterCity Strategy, an idea about transforming the way Edmontonians think about winter that has made so much of it possible.

We’ve started to give each other the social licence to not only create new festivals, but to guilt-free embrace festivals that are unique to Edmonton. We now look forward to winter as the time of the year we can do things that are true to this place.

The Flying Canoe Festival (a.k.a. Canoë Volant) blends indigenous and Métis myths, French Canadian traditions, Canadian history, visual art, theatre and darkness. At times it feels like a party, with everyone toting their own Thermos of warmth. At other times it feels like an outdoor church.

At the end of the walk, O’Byrne, his wife Lianna Chondo, and their daughters climb up through Edmonton’s French Quarter to the yearround outdoor patio at Café Bicyclette. On the way they pass cross-country skiers, men and women on fat bikes, and joggers with headlamps. Inevitably, someone asks them to sign up for the canoe races at the ski hill a few blocks away. Yes, that means canoes flying down snow-covered hills. 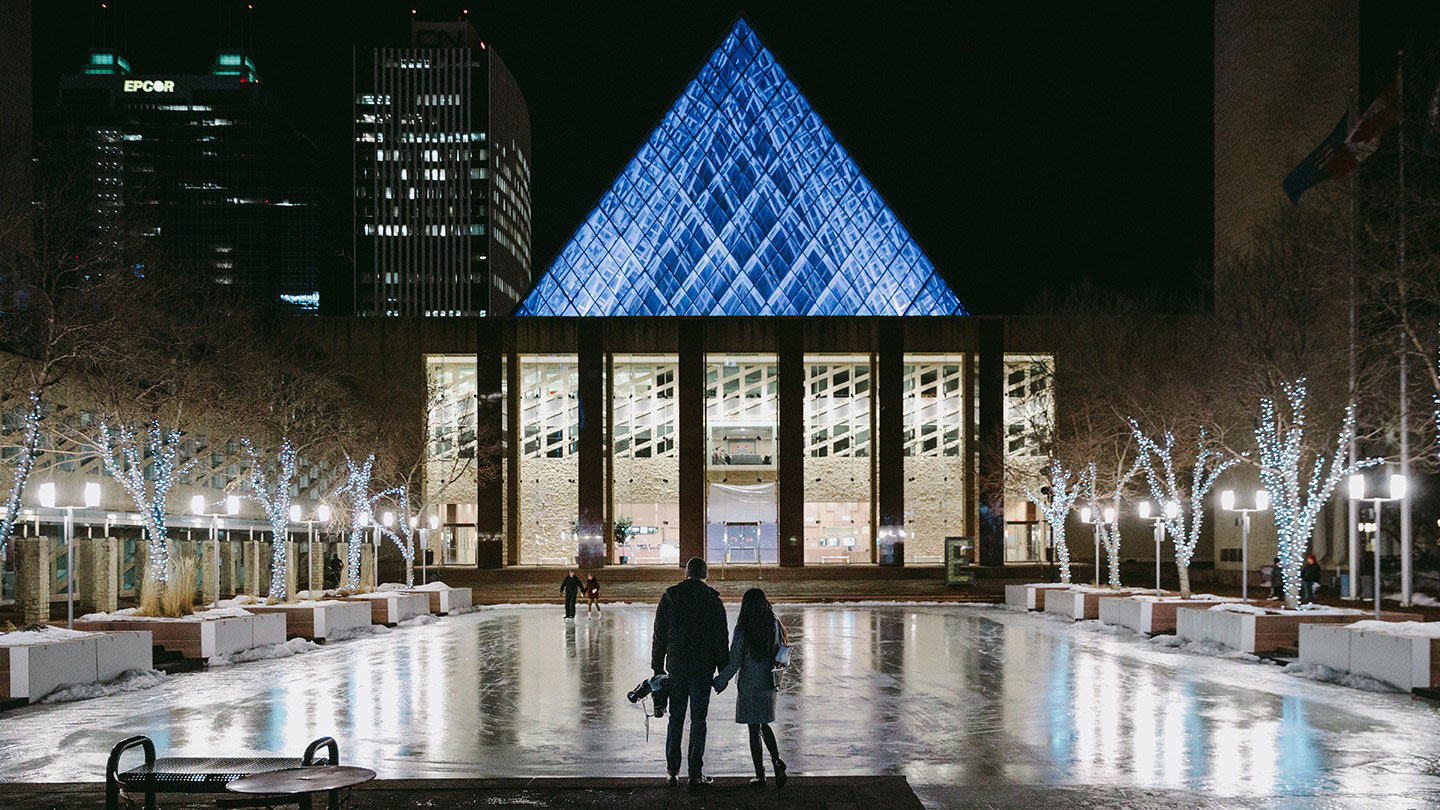 Not long ago, winter nights in Edmonton could be a tad quiet. Not anymore. The city has embraced the idea of celebrating winter. Now, it might be the best season of the year (shhh, don’t tell summer).

Not long ago it would have been much quieter outside, at night, in February.

In 2012, Simon helped launch what seemed a quiet volunteer initiative to “reclaim the joy of winter.” It was about urban design, transportation, recreation and business. But the most difficult challenge of all, it seemed, was to change the way Edmontonians talked about and thought about winter.

They needed a new story. 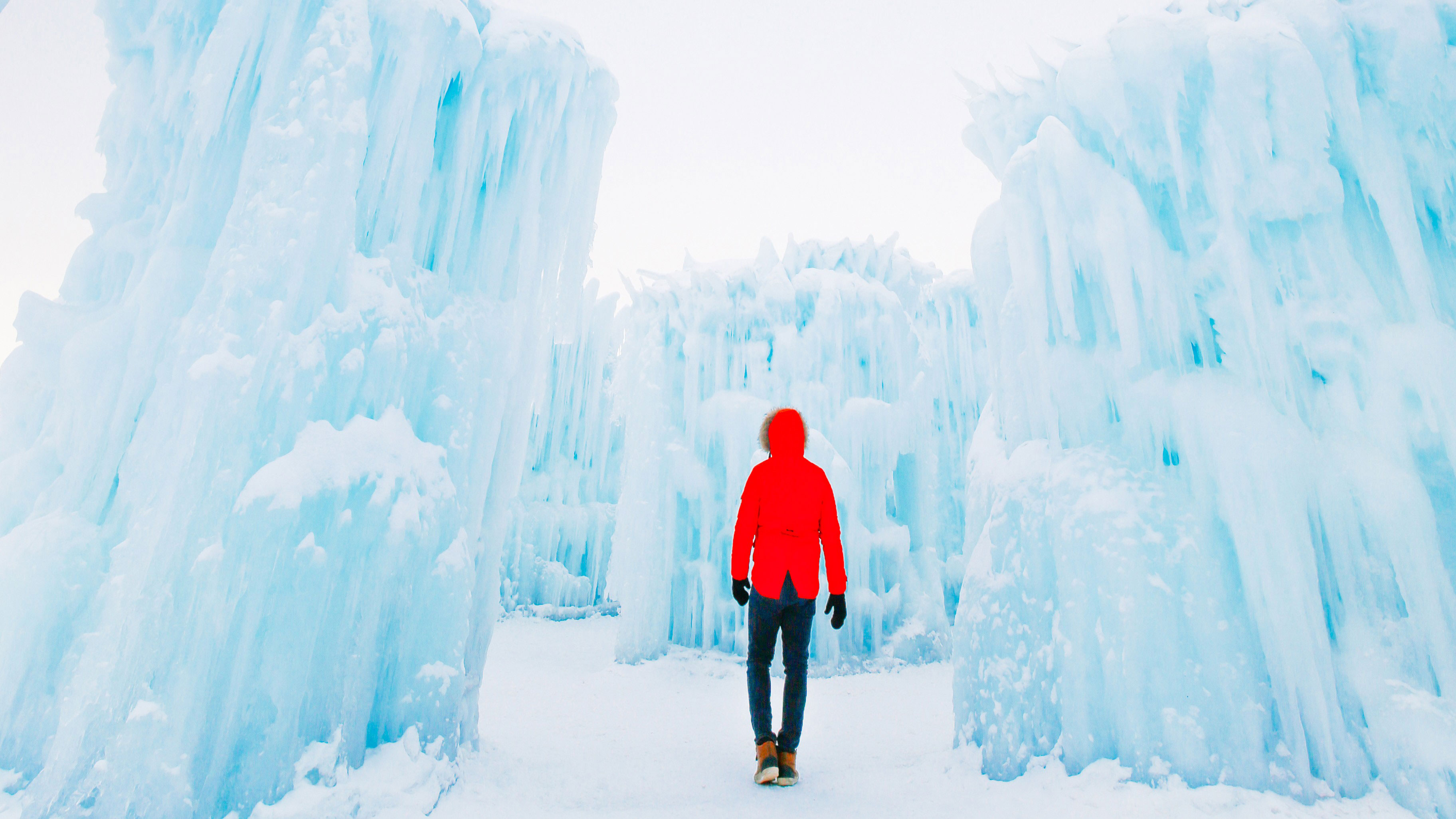 Edmonton’s Ice Castles features towers, archways and even slides built of frozen water to create a magical land of ice. Even better: At night, Ice Castles lights up.

What Simon and his fellow committee members learned, talking to adults, was that they had loved winter as children. It was mysterious and dreamy and fun. Some of Edmontonians’ strongest memories of childhood are outside memories, and they’re about more than skiing and skating. They’re creative: snow fights, snow angels, snow queens in castles, snow spies in snow tunnels. 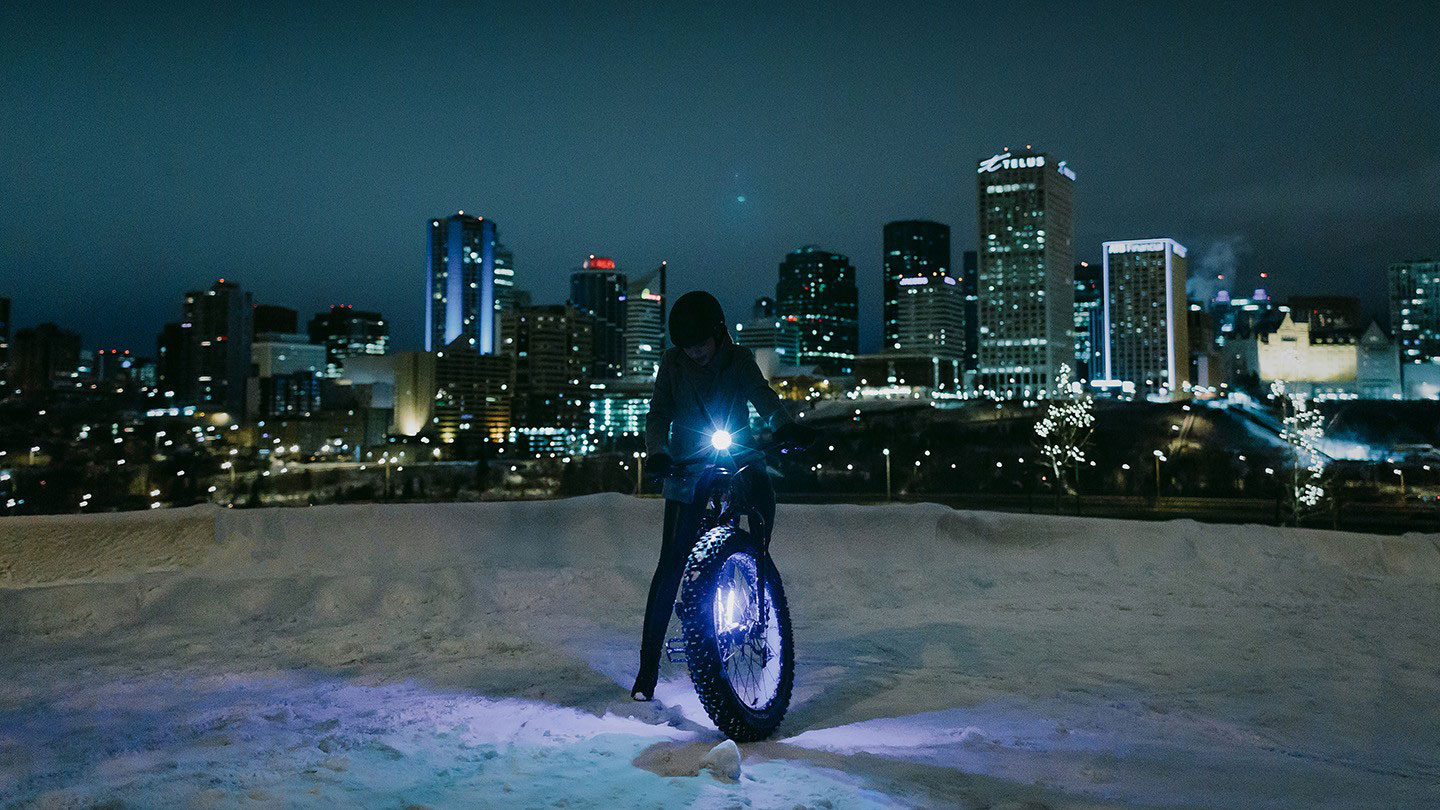 When Edmonton’s Winter City Committee members starting talking to people about winter, many had fond memories of the season as children, when they would play in the snow, ice skate and go sledding. That helped committee members realize those things are pretty fantastic, no matter how old you are.

Among adults, however, that view of winter was, until recently, perhaps less common than the opposing one: as a time of snow, darkness, and endless nights of binge television. A reminder of that more child-like view of winter in order.

It started awkwardly. Early attempts to give Edmontonians more to do and see in winter felt a bit like eating vegetables: good for us, maybe, but not terribly delicious. 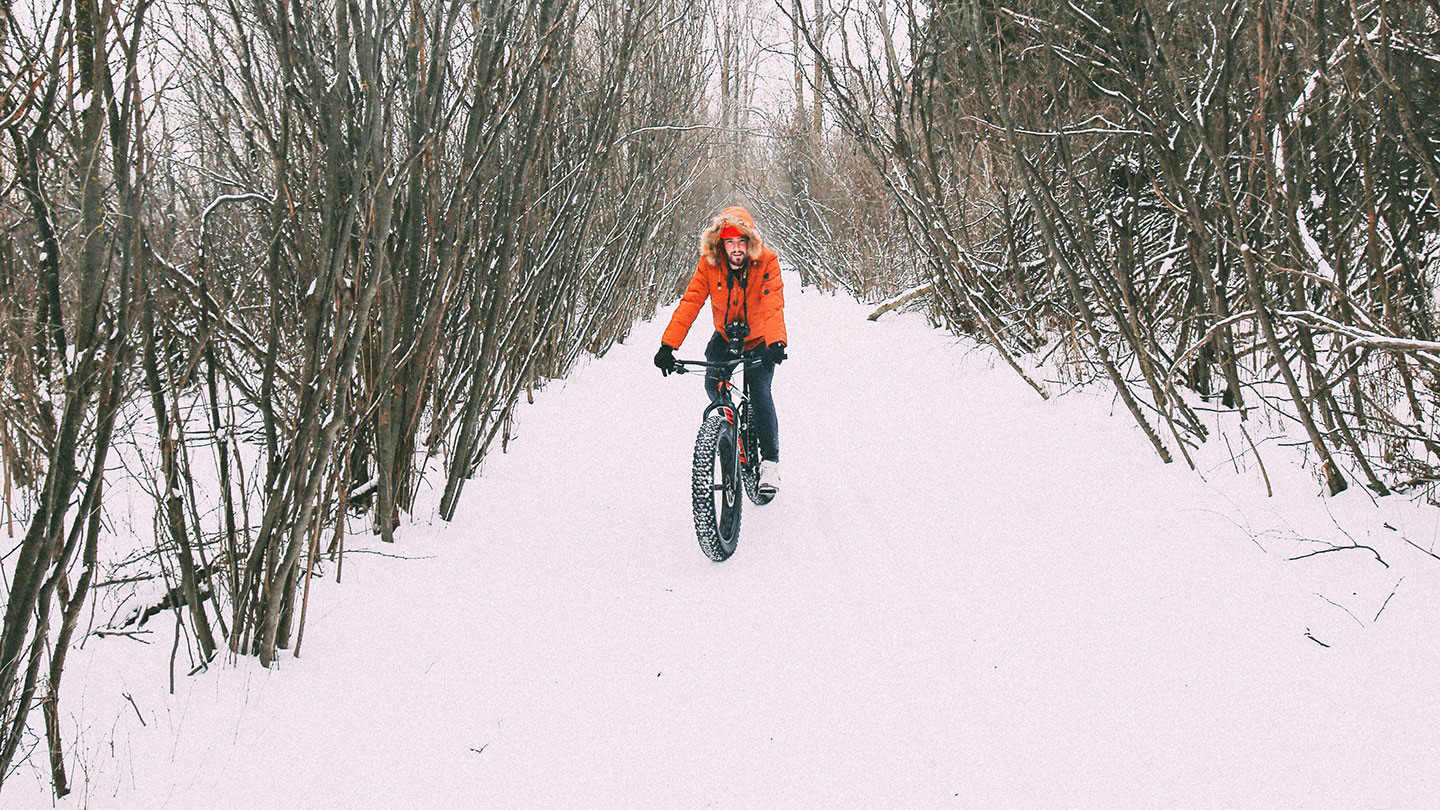 Here’s one way of enjoying winter: A snow-bike ride! New fat bikes, with ultra-wide tires, fit in perfectly in Edmonton’s snowbound river valley. It’s as easy as riding a bike.

In Edmonton, you can’t simply import something that works well elsewhere. The birthplace of the North American Fringe Theatre movement is stubborn about culture. They want to make their own fun. In the words of the city’s former historian laureate, Shirley Lowe, “In Edmonton, if we don’t grow it we don’t own it.”

The final result was simple, even a bit naive: “Go Play Outside.”

Edmontonians built their own fat bike meetups. They organized giant snowball fights. They petitioned the city government to change bylaws that restricted outdoor patios in the winter, and lobbied administrators to track-set cross-country ski trails in the central river valley. 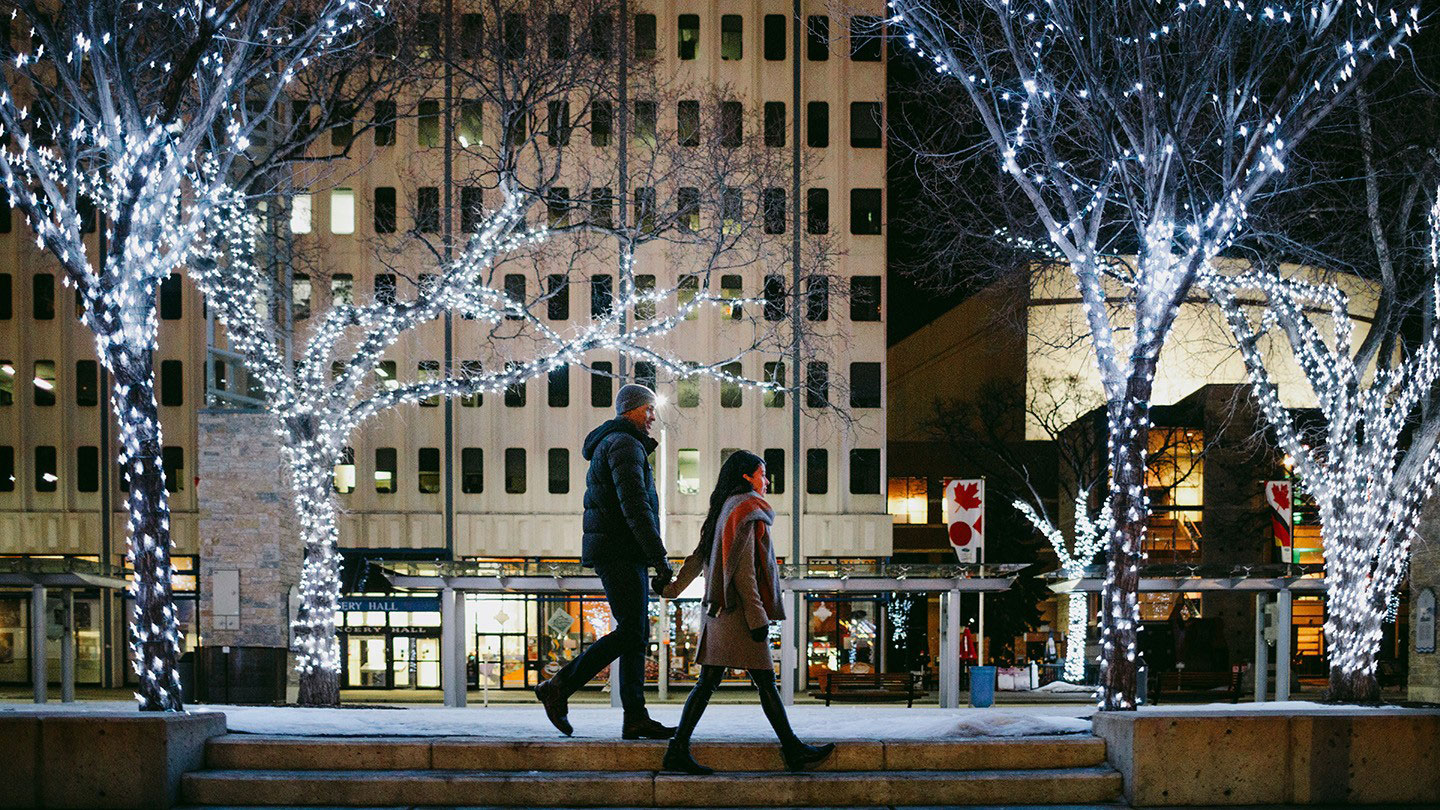 Edmontonians have embraced this new love of winter with gusto. Citizens have donated money to light up parts of the city, organized wacky festivals, and been inspired to get outdoors when it’s chilly.

Citizens donated money to light up Edmonton’s historic High Level Bridge. They launched strange and delightful new festivals, like the Flying Canoe and the multicultural Deep Freeze, and they expanded existing parties like Silver Skate, the Canadian Birkebeiner, and the annual slush cup at the Edmonton Ski Club. It came with food, drink, and a blend of new and ancient rituals. Organizers of traditionally indoor winter theatre and music events and festivals lit fires and took the art outside.

Compared to just a few years ago, it feels like a different city from November to March. It all happened so quickly that Edmonton launched an international conference to talk about making northern cities more shamelessly northern — the Winter Cities Shakeup.

In February, 2017, the second edition of the conference was unusually warm — 16C — sunny and snowless. Ten years ago this would have been cause for celebration. Now, for organizers and speakers like O’Byrne, it’s almost embarrassing.

Historically, Edmontonians would invite friends and family and other would-be tourists to visit in August, during the long days and the colourful madness of the International Fringe Festival and the Folk Festival. Now the long nights of February are easy to sell, at least to the artful adventurers. All you need is a warm but fashionable pair of boots. And a Thermos.

Todd Babiak is a Canadian writer and entrepreneur living in Edmonton, Alberta. He has published several bestselling novels, including Come Barbarians, Toby: A Man and The Book of Stanley. He lives in Edmonton. 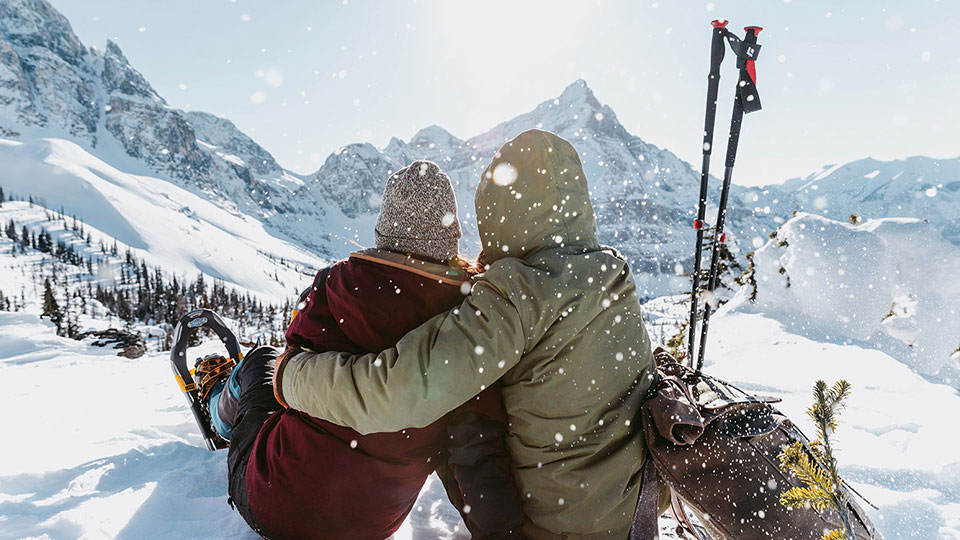