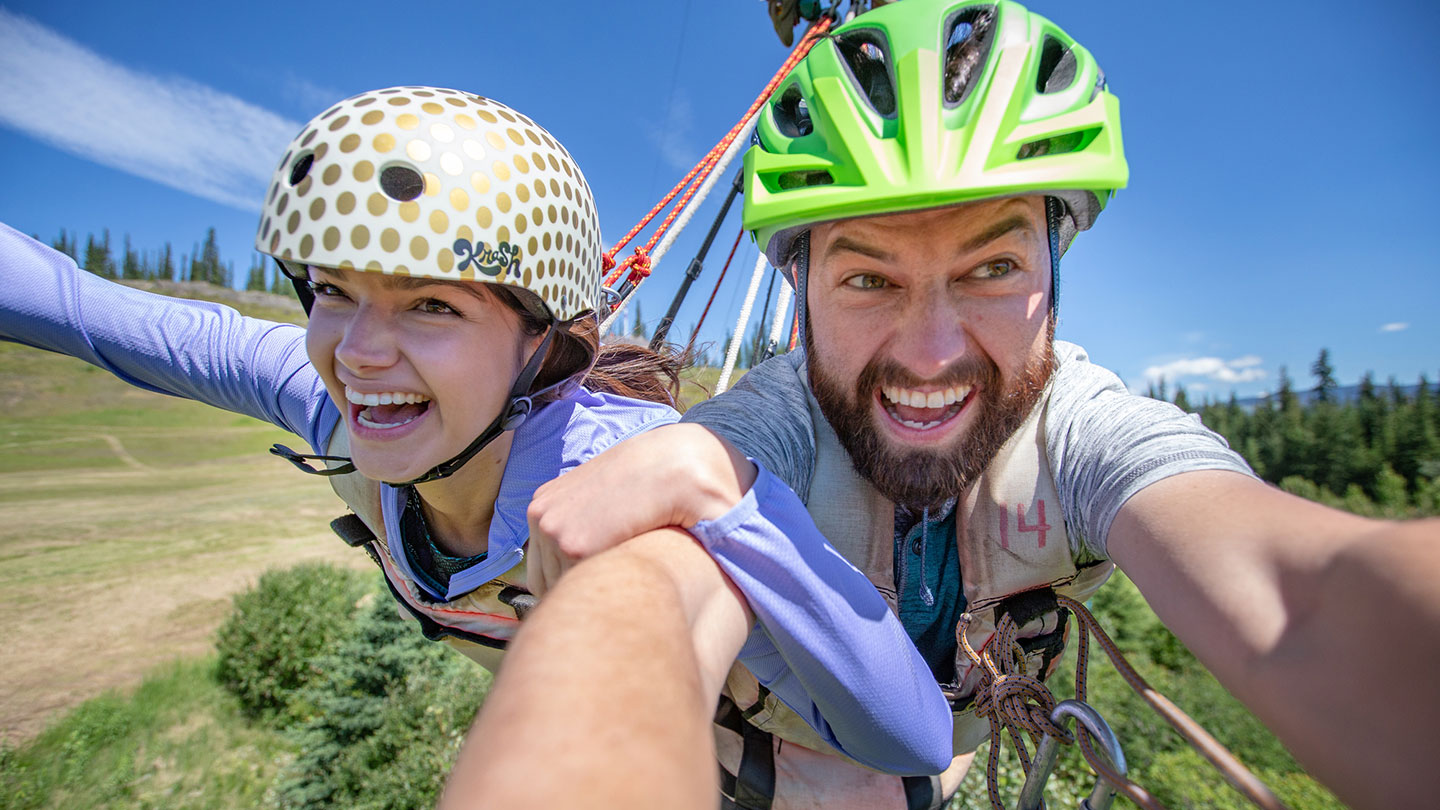 I’m standing on the roof of a custom-built chalet, nearly 200 feet off the ground, and Darrel Bossert is doing everything he can to convince me to jump. Bossert is the owner and operator of Alternative Adventures, located just outside of Jasper National Park, and it’s his “superhero zipline” — which over the past decade has helped more than 18,000 people soar through the air and back to the ground below — that has turned my legs to cement. I’m terrified, frankly, and have told him so. Back during orientation, he told our group that fully half of his customers, “at some point, go, ‘Oh my god, I don’t think I can do it.’” But right now, even being part of the majority is cold comfort.

As the person responsible for coaxing terrified tourists like me to dive headfirst off a building, Bossert’s job requires a subtle mix of salesmanship and psychology. Luckily, he’s also a born talker, the kind of guy who comes alive in front of a group and who claps his hands for emphasis when he gets to the really good part of a story; you want to believe everything he says. Bossert is a Jasper native who drew the first diagram of what would become Alternative Adventures in the 1970s while working at a nearby coal mine. He’s made it his goal to share the experience of flying with others ever since.

And for Bossert, it’s more than just a business. It’s personal. From a young age, he suffered from a serious, even crippling fear of heights. “My three younger sisters all learned to ski before me, because I was scared of riding the ski lift,” he says. “I was pretty sure I was going to be the first to fall off it.” Slowly, with the help of friends, Bossert was able to try out and eventually even enjoy outdoor sports — especially hang gliding, which he and his buddies would do from nearby Athabasca Tower. As he got better at it, Bossert wanted to share that thrilling feeling of being airborne with other people. But it was too labour-intensive to bring people up, one by one, to do tandem flights. That’s when the idea of a zipline came into his head, and it’s never left. 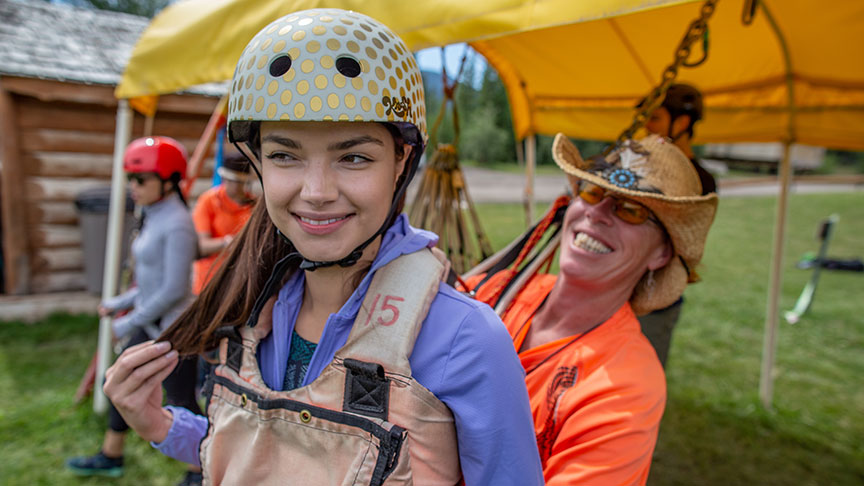 Buckle up for a zipline thrill. Next thing you know, you'll want to go hang-gliding.

Back at the Alternative Adventures kiosk, my nerves were kicking into high gear even as I signed the waiver. I felt jittery. While waiting for the rest of our group next to his old white van, which Bossert intentionally swerved and fishtailed all the way up the hill to get us comfortable with being uncomfortable, he pointed out different kinds of clouds in the sky and what each one means for predicting rain. I nodded gamely. But I didn’t hear a word.

Once we were at the top of the hill, Bossert led us up a flight of stairs and out onto the chalet roof. A cable above our heads ran on a diagonal all the way to the bottom of the run, where a huge chequered flag awaited. Directly in front of us, meanwhile, was a downhill ramp with two sets of white markings: you started at one, and when you reached the other one, you jumped. As each member of my group got clicked into the system, had their line adjusted (the more slack, the more it feels like you’re flying), and took off, I talked myself through every available out. “Not everyone is cut out for ziplining, right? I’m just one of those people. No one needs to know I backed out. The rest of my group won’t think less of me." 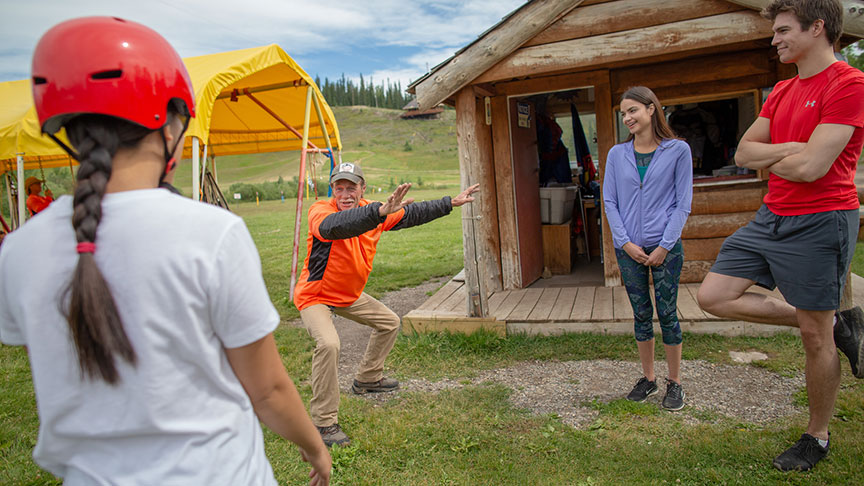 It takes the positive and infectious reinforcement of Darrel Bossert to get people to slay their fears and just jump.

Go on do it; choose flight over fright

Finally, I managed to boil the problem down to this: “At first it’s going to be scary, and I can’t control that.” After that, I was truly convinced it would be OK—maybe even fun. So was I really a person who can’t survive two seconds of feeling scared? Two seconds? It was like I tell my kids when they get their flu shots: it’s going to hurt, but then it’s going to be over.

Bossert, of course, had read my fear from the start, and he’s dealt with plenty of my kind over the years. Before the park opened to the public, he was once taking some friends down the zipline when one of them suddenly panicked at the last second. “I needed to say something right then and there to help them,” Bossert told me earlier, “and I didn’t have it.” It’s taken him years to develop what he calls a “complete” explanation about how human bodies—and minds—respond to zipline conditions, and how to gently guide people through those moments of panic. “I had to come up with something true,” Bossert said. “Because if you lie to people in a place like this, they’re just going to go home.”

So when he walks over to me on the chalet roof and puts his hands on my frozen shoulders, he’s completely switched into psychologist mode. It’s just the two of us up here now; the wind feels like it’s starting to pick up around us. “Right now, you’re experiencing your fight, flight, or freeze response,” Bossert says, holding eye contact. “That’s a part of your mind. But it isn’t you.” He gently clicks me into the harness and gets me to pull on it a little, so I start to trust it. He gets me to move my legs up and down, one at a time. Then he tells me that it’s human nature to want independence, but in moments like this, he and I are a team: we need one another to make this work. I take a deep, calming breath, as well as, somehow, a tentative step up to the first set of white markings. Bossert assumes his position just behind me. “Focus on this,” he says. “You only have one thing to do right now.” 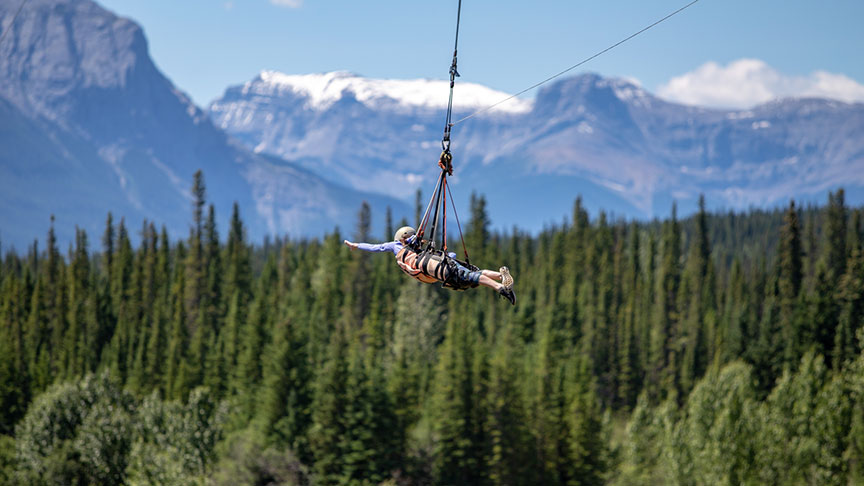 It's superhero time once you jump off the roof and get airborne.

Just try not to smile

And with that, there’s nothing left to do but run to the second set of markings, at the edge of the roof, and take to the sky. So I do.

The ride down is kind of a blur, to be honest. But when I come to a twirling, dangling stop at the bottom and get unclipped from the system, I can tell I’ve got a huge smile on my face. That’s when I hear Bossert’s voice come crackling through his co-worker’s walkie talkie: “Welcome to the legion of superheroes. How does it feel?”

A mountain man finds a new pace in southern Alberta