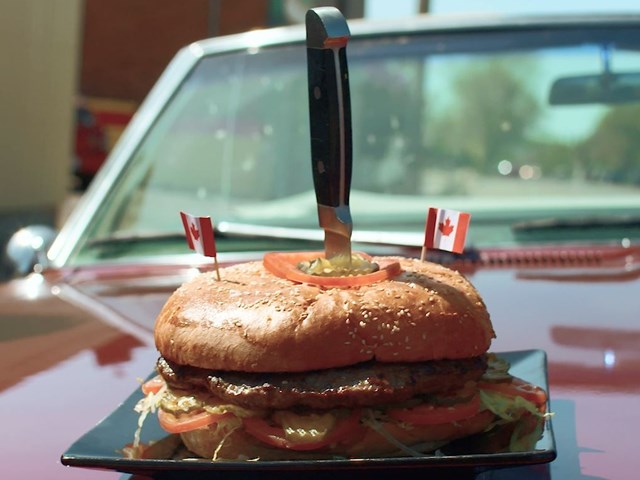 The first dish I ever cooked wasn’t runny Kraft Dinner or a PB&J sandwich impressed with my sticky, child-sized fingertips. It was a creamy mushroom burger in a High Prairie diner kitchen with my dad. He guided the greasy metal spatula in my tiny grip over the industrial grill, holding it steady as I flipped the sizzling patty onto its pink side, and pulled away quickly before the popping grease got me. Then I smothered the charred side with a somewhat famous dressing in Alberta—a concoction of Worchester, Tabasco, soy sauce and Campbell’s mushroom soup.

I am the son of a Burger Baron, that quirky burger shack speckled across the province that never seems to share a logo, interior design or even menu between franchises. That mushroom sauce is the only thing these rogue franchisees ever agreed on, and even though the number of Burger Barons has dwindled, from 90 in the 1970s to about 30 today, they remain strong in Carstairs, Maskwacis and other small towns where the burger is king—or, at least, a kitsch.

Maybe it’s the robust cattle farming industry (long before #AlbertaStrong bumper stickers there was simply “I ❤ Alberta Beef”), or strong traditional values that pair well with nostalgic fast-food, but burgers are serious business in the province’s rural communities and some sandwiches earned urban-legend status.

As local as beef gets

Every day, hundreds of people in Turner Valley chomp into Chuckwagon Café’s six-ounce patty, made with beef raised by the owner himself. Farmer Terry Myhre dry-ages it for 28 days, which intensifies the flavour, and sticks with young Murray Gray beef for extra tenderness. The three-cheese melt and homemade relish are all the more reason to exit off Highway 22 when the rustic red barn restaurant comes into view.

Another southern Alberta classic is Drumheller’s Bernie and the Boys Bistro — and, boy, you better bring an appetite. With enough girth that the fingers of both your hands (and you will need both) won’t touch when you hold it, and tall enough to sink an entire knife blade through it vertically, the Mammoth burger is more than a name. And it’s more than a gimmick. Inventor Bernie Germain puts equal if not more effort into the eight-inch-wide sesame seed bun and tangy barbecue sauce as he does the 25-ounce meat.

But if you’d prefer to be your own chef, there’s the “steak pit” at nearby Patricia Hotel in Patricia (population 108). When I visited last fall, on my way to the Royal Tyrell Museum, childhood memories flooded back to me. The patty arrived to my table pink and cold, with brief instructions from the server: “Grill’s over there,” she said pointing across the tavern. “Condiments there.” She pointed out a buffet table on the empty dance floor. Unlike my father though, she did not follow up by sending me to the dish pit.

Driving the through province, there’s not always time to sit and dine, let alone cook your own meals, but you don’t have to go out of your way for a memorable burger. Should you cruise the Trans-Canada Highway through Calgary, note a blue and white drive-in burger shack that looks like something out of the movie American Graffiti. “Where were you in ’62?” asks the movie’s tagline — and if you’re a native Calgarian the answer might be here, at the grand opening of Peters’ Drive-In.

While other drive-ins eventually opened their doors for customers, Peters’ has stuck with outdoor picnic-table seating and only recently moved past its cash-only mantra. That’s never stopped hordes of people from crowding around its take-out windows for a juicy cheeseburger made with Grade-A ground chuck and Canadian cheddar, and shakes stirred with real ice-cream and fruit (on a hot summer day, they could sell 4,000 shakes). The retro cup containers are practically keepsakes, but there's evidence that Peters’ is entering the present: After 53 years it opened a second location—on the Queen Elizabeth II Highway in Gasoline Alley at Red Deer. Still take-out only.

Across Northern Alberta, there are just as many legendary burger-mongers, from the no-frills/all-value Betsy’s Burger Shack in Smoky Lake, to her gussied-up long-distance relative Jack’s Burger Shack (originally in Slave Lake), where frills are many. Hangover, one fan favourite, is two sandwiches: a smashed patty with classic condiments and a grilled cheese sandwich on the second bunk. Naturally, I gravitate to the mushroom burger smothered in a tangy sauce.

Jack’s moved to St. Albert in 2013, a suburb of Edmonton, where I now live. Like its predecessor, the fluffy buns are baked daily and once they’re gone, the door’s locked. Lucky for me, though, my wife and I recently bought a new house to start a family, just two blocks from one of the last city Burger Barons. Now my kids will have first memories similar to mine.