WHERE THE BUFFALO JUMPED 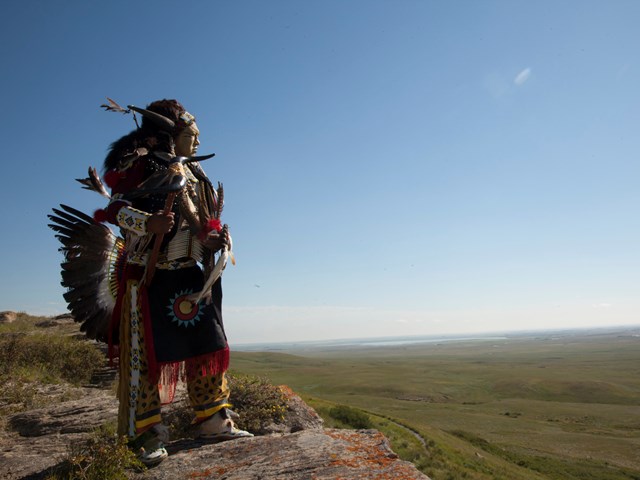 Standing amidst the tall grass at the base of Head-Smashed-In Buffalo Jump in southern Alberta, I close my eyes and imagine the buffalo stampede approaching. An inescapable dust cloud forms as their hooves pound the earth, sending a thunderous shockwave through the landscape. The buffalo’s panic is palpable as they rush to the cliff’s edge, driven forward by the Blackfoot. Then it happens: three hundred beasts come cascading over the cliff, falling to their deaths below.

It’s my first time at this UNESCO World Heritage Site, located about two hours south of Calgary. I’d read that Head-Smashed-In was one of the world’s oldest, largest and best preserved buffalo jumps, but I had no idea what that really meant. As I walked around the base of the cliffs – one of many buffalo jumps, or Pis’kun, used by First Nations for nearly 6,000 years – the first thing I thought was how short the cliffs were. How could such a short fall kill so many buffalo? I was hoping the Interpretive Centre would have the answer I was looking for.

To get the full story I needed to infiltrate the cliff – literally. The award-winning Interpretive Centre at Head-Smashed-In is built right into a section of the cliff just south of the jump. The seven-tiered centre combines archaeological discoveries, historical records, high-definition videos and fascinating stories of the Blackfoot to help you understand how and why they used the buffalo jump.

I explored the centre with the guidance of Stan, a site interpreter and a member of the Peigan clan (a tribe of the Blackfoot). Through his stories and an interpretive panel at the top of the cliff, I found my answer about the shortness of the precipice. Over time, the cliff – last used as a jump in the 19th century – has eroded and soil and vegetation have gathered at its base.

Archaeologists have unearthed bones and tools more than 10 m (33 ft) below the surface, revealing the cliff was once twice its current height. If the Blackfoot could get the buffalo to the cliff’s edge, the beasts didn’t have a chance.

Walk in the Footsteps of Blackfoot

It’s easy to imagine the mindset of a Blackfoot buffalo hunter here. Throughout the summer, the Interpretive Centre offers four-hour guided hikes to the ancient drive lanes. I’ve made a note of this for next time. I’m eager to walk the hunters’ path. Standing on the plaza I watched the drumming and dancing performance. I could feel the beat of the drums in my chest. As the rhythm quickens the ornate headdresses and traditional costumes of the hoop dancers become a whirl of colour.

Emerging from the Interpretive Centre, I return to the top of the cliff for one last look. The view of the green and gold prairies sweeping below is unforgettable. Thanks to this UNESCO World Heritage site, the history of Head-Smashed-In is preserved alongside the bones that lie beneath the soil. And there are many more stories to tell.