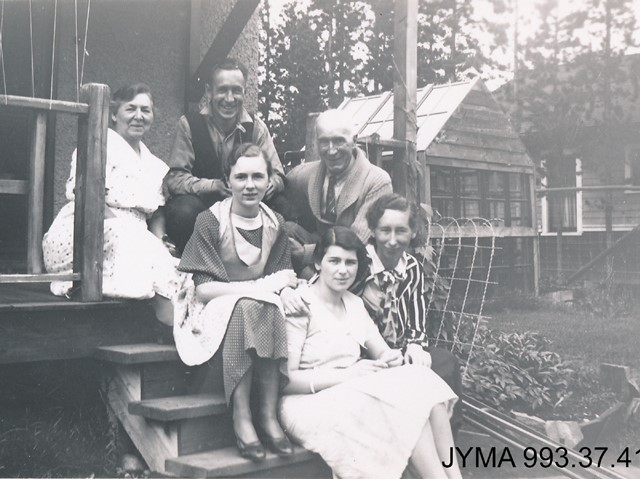 Housing was difficult to find in Jasper and, after living in several locations including Snape’s Hill and Sleepy Hollow, Jack commissioned architect and friend Alfred Merigon Calderon to design their home at 808 Geikie Street.  Robson hoped that Calderon’s design would meet the approval of Parks officials as he had designed several prominent buildings in Jasper including the Church of St. Mary and St. George, the CIBC building, the Superintendent’s Residence and Office currently the Info Centre (1913) and the Railway Station (1925).  Construction on the house began in 1924 and while the house was being built, the Calderons lived in a tent near the United Church and Mrs. Calderon would sit and read in the partially built Robson house as it had the best view in town. The house was completed in stages and Muriel remembers using a ladder to get to the second floor bedrooms.  The house was completed in 1930 and was one of the larger houses in the town site, a spectacular 24’ x 29’ two story building.  In early 2000, the Robson House was scheduled for demolition but with the help of Parks Canada, the Built Heritage Committee, and the Jasper Improvement District/Jasper Town Committee moved the Robson family home on May 17, 2000 from its original location to the 400 block of Patricia. Today it is an “A” listed Parks Canada Built Heritage Property run by the Robson House Historical Society (2001) and it is currently the offices for the Jasper Park Chamber of Commerce.

Jack worked as a warden several years in Jasper before taking a job with the Canadian National Railway where he worked until his retirement. The Robson family was very active and a family tradition was to have Sunday breakfast at Pyramid Lake where Jack would cook eggs and bacon over an open fire.  Len continued this tradition after his father's death.  Leonard Robson was a mason and worked for the railway as an electrician.  During the Second World War he served with the Royal Canadian Engineers.  He built one of Jasper's first iceboats and sailed it on Lac Beauvert and was very active with the Boy Scouts.

Muriel Robson worked in the medical field for over 30 years at the Vancouver General Hospital. She became Chief Cardiology Technician, was President of the Cardiology Technicians Association of B.C. in 1972-73. Her mother, Mary lived the last 10 years of her life with Muriel in Vancouver. After her retirement Muriel returned to Jasper where she lived until her death in 1996.

Joan Robson was as self-taught botanist an avid hiker and outdoorswoman.  She recalled one hike, lead by Pete Withers, where they had breakfast at the Beanery at 3 am before climbing Pyramid Mountain- a 12-hour hike.  In July 1927, Joan was a member of the Jack Brewster packhorse trip on the Glacier Trail, from Jasper to Lake Louise.  In order to take the three-week trip, she had to request a special leave from her job at the Imperial Bank as she only had two weeks holidays. Each day on the Glacier Trail she slid wildflowers into a bank passbook, transferring them into pocketbooks in the evening which the guides weighted down with the pack boxes to press her flowers.  She developed an interest in flowers at an early age and was granted a rare special permission to pick wildflowers in the national parks.  Joan was also a talented watercolour painter and did beautiful illustrations to go with her extensive pressed flower collection.  Joan’s watercolors and other early images, as well as the flowers that she picked, were donated to the Jasper-Yellowhead Museum & Archives in 1993 and are currently on exhibit at the museum until March 31st, 2019.  A closing reception of Joan’s exhibit will take place at Robson House, the offices of the Jasper Park Chamber of Commerce, 409 Patricia Street, on Friday, March 15th from 4-7pm.  Tours of the house will be available along with refreshments and appetizers.

Thank you to the Robson House Historical Society for their support.

Learn more about other Jasper families and other interesting stories at the Jasper-Yellowhead Museum & Archives.