STROLL THROUGH HISTORY AT FORT CALGARY 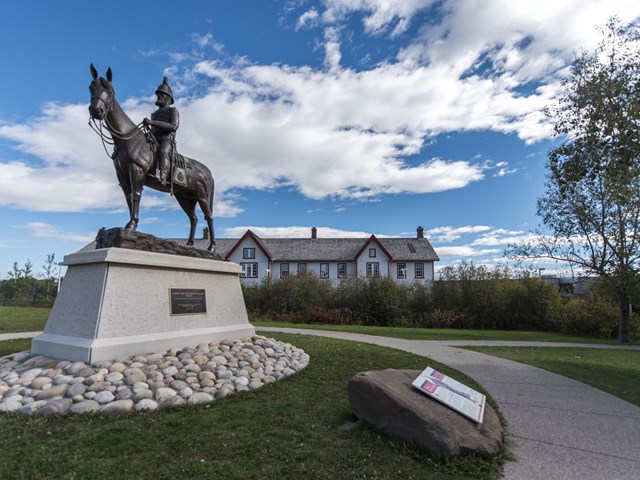 At Fort Calgary we stopped outdoors on the 40-acre property and encountered the man who named the fort a year after it was built in 1875. Staring up at the statue of Colonel James Alexander Farquharson Macleod on his horse, we followed his gaze toward central Calgary’s steel and glass office towers. It’s as if he was looking from the past to the future.

Canada’s federal government established the North West Mounted Police in 1874 to bring law and order to the young country’s untamed west. The goal was to stamp out the whisky trade and make friends with First Nations so settlers could come in peace. Erected by the NWMP where the Bow and Elbow Rivers meet, the small wooden fort provided views of anyone approaching by the rivers.

We felt humbled by the men who’d dedicated their lives to policing so long ago. It was a harsh life with no frills, where savouring a bite of small game shot with a field gun may have been the week’s highlight. Now a national historic site, the fort gave birth to a thriving city of over a million residents, when a handful of men gained a foothold as the area’s government outpost.

Originally called the Bow Fort, Colonel Macleod, who was born in Scotland, officially renamed it Fort Calgary in 1876. The fort’s new name was inspired by a castle on Calgary Bay on the Isle of Mull in Scotland. Colonel Macleod served as North West Mounted Police Commissioner from 1876-1880. The NWMP would be absorbed by the Dominion Police in 1920 and become known as the Royal Canadian Mounted Police (RCMP).

The RCMP’s red serge dress uniform and flat-brim Stetson are widely recognized as symbols of peace and lawfulness. Many Canadians now simply call them Mounties.

As my wife and I strolled the fort’s grounds with our two teenage nieces, we learned about the Mounties’ history, as well as how life in Calgary has changed over more than a century. It took us about 45 minutes to move leisurely through the 1888 Barracks and Interpretive Centre, where we explored exhibits, hands-on games and audio-visual presentations.

One of the first exhibits showed a constable’s sparse living quarters. There was a wooden box labelled for ammunition (.577 bore, Snider rifles), a bed with a fur blanket, black leather boots and a brown leather revolver holster hanging on the wall. A packet of playing cards and some coins lay on a small table. We felt a sense of gratitude that those who’d led Spartan lives helped create opportunities for so many others as the city grew.

We capped the visit with the popular big family brunch served inside the interpretive centre building. While the girls dug into French toast with fruit and whipped cream, they considered that the men who built the fort that later gave birth to Calgary never had it so good.