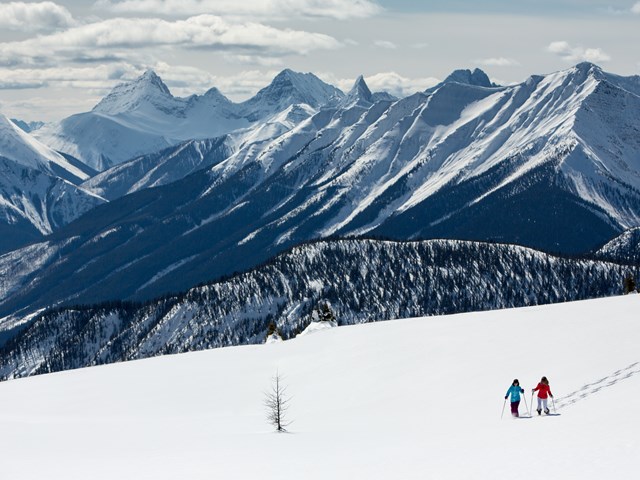 Today is a day for new tracks and new discoveries. In just five minutes, our group has left civilisation behind. Against a backdrop of snow-draped peaks, we make our way through the silent forest. It feels like we’re walking on clouds as the soft dry powder puffs up around our snowshoes.

Our guides are knowledgeable and they’re having as much fun as we are. Some have been guiding in the Lake Louise area of Banff National Park for more than 20 years. Their vast experience and passion for outdoor exploration really brings the story of the Canadian Rockies to life.

After taking the Historical Snowshoe and Fondue Tour at Sunshine Village with my husband last year, we realised that snowshoes are the ticket to paradise in winter. They give you the freedom to float on top of the waist deep snow with ease. Venturing further into this pristine wilderness, we watch for signs of wildlife. Although the area is home to elk, moose, deer, cougar, big horn sheep, lynx and wolf in the winter time, your chances of sighting Alberta’s famous wildlife – including grizzly and black bears – are much better in the spring, summer and fall. That said, by the end of our trek we had spotted the tracks of a snowshoe hare and pine marten and what might have been a wolf. It’s a pretty surreal feeling to know that even in this blissfully silent wonderland we’re really not alone.

An All Ages Activity

Another cool thing about snowshoeing is that there is absolutely no age limit. For as the old adage goes – if you can walk, you can snowshoe. Our group of intrepid adventurers proved this theory true. One of the couples brought along their eight year old twin boys, who maintained our pace beautifully. However I was most impressed with the couple from Germany, who travelled to Alberta for their fiftieth wedding anniversary. At ages 75 and 73 respectively, Stephan and Katrin easily won my vote for the most enthusiastic and fun-loving participants.

At the halfway mark, we plunked ourselves down in the light fluffy snow. Hot chocolate was passed around and we all sat in comfortable silence. Snowflakes began to spiral gently from the sky and even the younger ones in our group were mesmerised by the beauty of this place. Although I’m warm from trekking up the last hill, I feel goose bumps wash over me and from the looks on the faces around me, I am not alone. What a magical, peaceful landscape.

As we’re making our way back to Lake Louise one of the guides smiles at me and says, “the most powerful emotional feeling you get here is not your own; it’s the one you trigger in someone else.” I couldn’t have said it better myself.