SEE THE NORTHERN LIGHTS IN ALBERTA 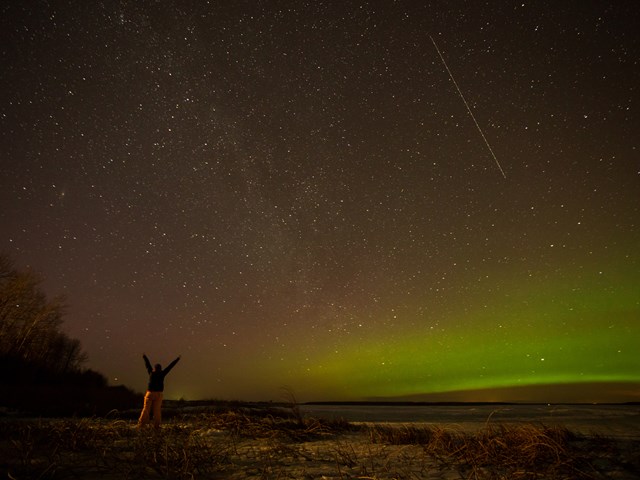 One night coming home from out of town, we got lucky – the northern lights were blazing overhead. We pulled over and watched them dance and flicker for what seemed like hours. But we don’t have to rely on luck anymore – now we can track them and then plan to be at the right spot to see them. Here are three of the darkest places to see the aurora borealis in Alberta.

How about Jasper National Park, one of the largest and most accessible dark sky preserves in the whole world? Against the darkest sky, you’ll get the brightest colours – swirly ribbons of rippling green, shoots of hot pink and neon yellow will dance with the twinkling stars.

Good. Now that you know what you’re waiting for, you’ll need some other things to do while being patient. Someone once described Athabasca Falls as having its history written in potholes and I think they were right, but it’s a cool twisty trip down under the smooth rock arches. And I bet you can see the sky from the Jasper brew pub too.

The season for northern lights action is all the way from autumn through April. Plan on spending some quality family time at the Jasper Dark Sky Festival, with special events taking place throughout the month of October.

Beaver Hills is a huge dark sky preserve just east of Edmonton. Winter camping is free in Elk Island National Park, where you’ll see plenty of bison in their shaggy winter coats. In the early autumn at the start of aurora season, splurge on comfort camping in Miquelon Provincial Park. A tent with a deck, BBQ, queen bed and heater is a pretty good place to kick back and watch the sky. Or pitch your own tent and snuggle up!

If we get lucky again, we’ll even see the aurora all the way down south in Cypress Hills Interprovincial Park. Given its elevation and lack of urban light pollution, the area is a dark sky preserve too.

There are lots of nice places to stay but I’ve been eyeing these cowboy cabins with Jacuzzis. During the day we can explore the parkland that rises and swells to the highest point between the Canadian Rockies and the east coast.

We’ll schedule a wake-up call for midnight and go watch the skies. Even if we don’t see the northern lights, we’ll see a gazillion stars, planets and even the space station, as the twinkling swooning sky twirls down on us in every direction as far as we can see.