An inveterate traveller, Jane has worked, played and stayed in cities and countries around the world. A writer by inclination and profession, her innate curiosity compels her to explore new cultures and adventures, sharing her impressions with the world at large. 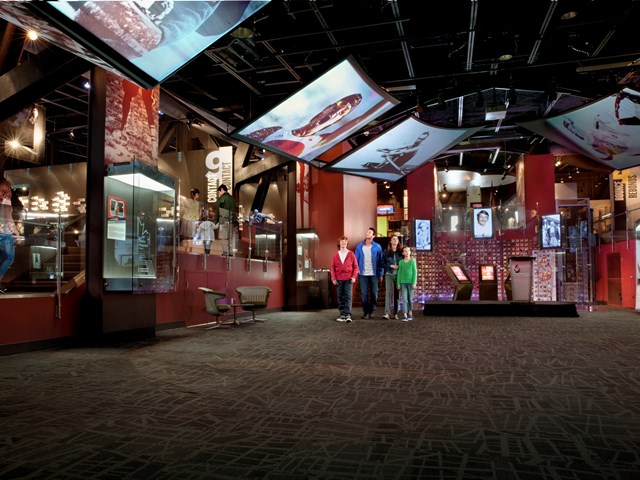 From the moment I stepped inside Canada’s Sports Hall of Fame I felt a sense of wonder and awe at what has been accomplished by the great names in Canadian sport.

When the original Hall of Fame had outgrown its space in Toronto, a call went out across the country to find a new home. Calgary won the bid and this incredible place opened to the public in 2011.

From the outside, the building is a long bright red rectangle that tilts up at the far end. To me, it mirrors the swoop of the towering ski jumps in the background here at Canada Olympic Park, active reminders of the Olympic Winter Games held in Calgary in 1988.

The Hall, as it is known by the locals, encompasses 3,716 sq. m (40,000 sq. ft.) dedicated to honouring Canadian athletes and features more than 62 sports. You could zip through it in an hour and a half but only if you don't have a pulse. Trust me, you’ll want to spend a full morning or afternoon, maybe longer, since there’s just so much to see and do here - especially if you have kids five years or older. And you don't have to be a sports nut to have a truly impressive experience.

Like the saying goes, they had me at hello. To enter the central Grand Hall you walk through an open corridor that has sports scenes running beneath your feet - lane swimmers, rowers, curlers. I wanted to turn around and do it again so I could see all the sports portrayed.

You’ll likely do a couple of 360s in the Grand Hall - a truly inspirational space where you are immediately immersed in the sights and sounds of epic sports storytelling. Start out at the Wall of Fame which displays the Hall's hundreds of inducted Honoured Members. Then move on to the Hero Stations where you can look up profiles of each sport legend. And if you're a trophy nut, you can ogle to your heart's content.

The space is beautifully laid out so you can move effortlessly through the 12 feature galleries surrounding the Grand Hall. Every gallery is filled with treasured artefacts and hands-on interactive exhibits. Eleven of the galleries focus on a different theme, from water sports (rowing, swimming, sailing) to hockey and skating, to boxing and skiing and F1 racing and so much more. I really liked the one called Bounce, where you can learn about the origins of basketball (and yes, it was a Canadian who invented the game) and then use the sports simulator to try your hand at hockey, baseball, football and soccer (you might as well just leave the kids here for a day or two!).

Another simulator turns you into a broadcaster, sports reporter or photographer. Or step into the ring and shadow box with world heavyweight champ Lennox Lewis. Be inspired by the greatness of Terry Fox and Paralympic Champion wheelchair racer, Chantal Petitclerc. Discover the largest collection of Canadian Olympic memorabilia in Canada.

The twelfth gallery is the Changing Gallery which rotates new exhibits related to Canadian sport. When I was there, it was a celebration of curling and they had a simulation where you could throw a rock down a sheet of ice.

I finished off my visit in the Riddell Family Theatre, where I watched a short film narrated by Canadian musician Bryan Adams, aptly named, "Canada's Greatest Sport Moments.” It brought a tear to my eye and more than a few goosebumps. I felt proud to be a Canadian as I reluctantly left the Hall.