ROAMING AROUND THE ROYAL TYRRELL MUSEUM

Fascinated by Alberta's natural side, Megan loves to wander mountain passes and river coulees. Park interpreter turned freelance writer, she has penned hundreds of articles based on self-propelled adventures around the province with her husband, daughter, and canine companion. 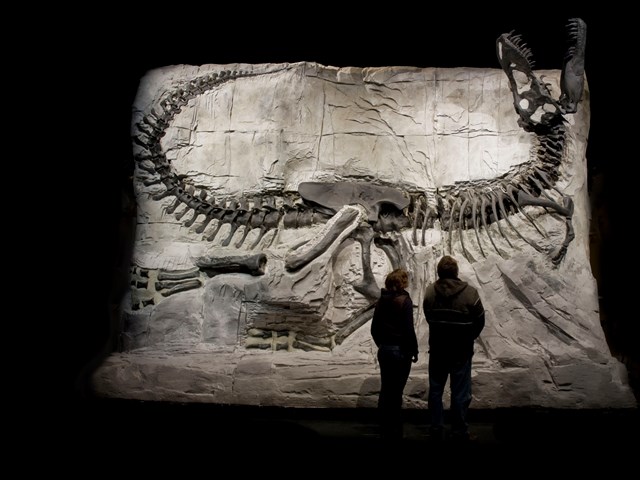 He flew across the parking lot, three-year-old legs pumping, oblivious to four adults shouting his name. His dad took off full-speed to intercept. Both screeched to a halt in unison.

Taking my niece and her young family to the Royal Tyrrell Museum of Palaeontology in the heart of Alberta’s Badlands was shaping up to be a full-blown adventure – and we hadn’t even passed through the front doors yet.

Situated in Midland Provincial Park, 135 km (84 mi) northeast of Calgary near the town of Drumheller, the Royal Tyrrell is dedicated exclusively to the study and exhibition of prehistoric life. When I suggested a visit, I was thinking of the appeal for a three-year-old but these ancient beasts have an ageless cool factor. Dad was even more excited at the thought of wandering through the millennia surrounded by hundreds of fossils and dozens of complete reconstructions.

Leading into Lords of the Land

Inside, we zipped past the massive picture windows of the Preparation Lab. When you don’t have an energetic toddler in tow, you can watch as technicians carefully remove the surrounding rock in order to expose the fossils. The Royal Tyrrell Museum actively collects specimens for research. New fossils are found each year in nearby Dinosaur Provincial Park, where the museum has a field station. Alberta’s badlands are one of the most prolific sources of dinosaur fossils in the world.

But tools and encased fossils lying untouched on workbenches weren’t enough to hold the attention of a pre-schooler today. We headed for the Lords of the Land. “Black Beauty” – a rare blackened skull of a Tyrannosaurus Rex – caught dad’s eye immediately. He stopped to read the interpretive panels. I followed junior on the flyby, flitting like a bee from flower to flower or, in this case, from fossil to fossil.

In 1884, Joseph Burr Tyrrell was a geologist with the Geological Survey of Canada. Tyrrell and his team were searching for coal in the Red Deer River valley when they came across a 70-million-year-old dinosaur skull. It was the first Albertosaurus – which means flesh-eating lizard from Alberta – ever found. Word spread and Alberta became known for its wealth of fossils. Palaeontologists from across Canada and the United States flocked to the region from 1910 to 1917 in a period dubbed the “Great Dinosaur Rush.”

The Tyrrell Museum of Palaeontology opened in 1985 as a research and scientific facility, but plans changed to include a public gallery and display area. Over half a million people came to visit the first year. Five years later the museum received its royal designation and quickly became world-renowned for educational programs, exhibits and dedication to the science of palaeontology.

Fleshing out the Bones

When we hit Dinosaur Hall, I watched as the little guy reached for his dad’s hand. Together they slowed, staring silently at the dinosaur skeletons and fleshed-out replicas. Triceratops. Tyrannosaurus Rex. Duckbills including eggs, babies, young and adults. Every detail of the 30-plus dinosaur specimens – both skeletons and reconstructed dinosaurs – was absorbed. The frenetic energy stilled. A connection was made.

Chatter picked up again as we blasted past the humid and green Cretaceous Garden and hurried through Mammal Hall and the Ice Age to find the café. Next time, we will break the museum visit into two days. When the lad is a little older, we will plan a winter visit and spend a night snoring with the dinosaurs on a sleepover… or we could join in on a summer dig… or… so many dinosaur experiences, so little time.