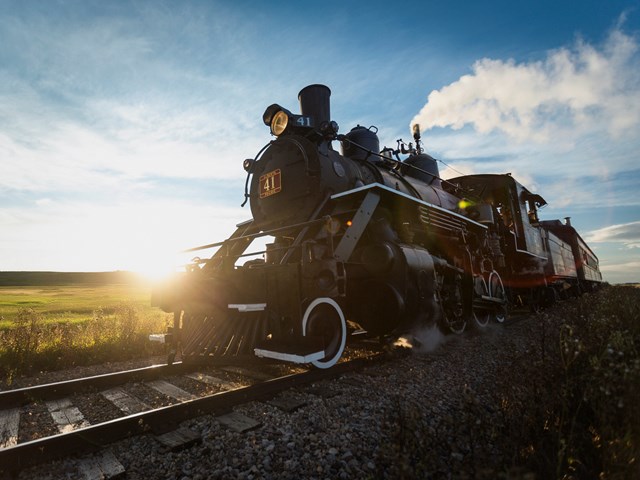 Alberta’s my home and I want to kick-start the summer with a journey to the heart of it. So I’ve booked a rail tour on the Alberta Prairie Steam Train to explore a part of the province known for its big sky and vast grasslands.

Alberta Prairie Railway Excursions in central Alberta offers a variety of rail experiences over the course of the season. You can choose from live theatre performances, fine dining, special shows for families and trips that are just for grown-ups. Board your train in Stettler, just two and a half hours from Edmonton, or three from Calgary.

I picked up my ticket at the rail station near the old grain elevator and settled into my assigned seat for the five to six-hour return trip. The conductor yells, “all aboard!” and the train huffs slowly out of the station. There’s a gift shop as well as concession area on-board that serves drinks and snacks. Walking through the cars, I notice information cards that recount a brief history of each rail car. I spent most of my time in the breezy open-air car watching the prairie roll past, the steam from the engine evaporating overhead. As it turned out, I was in the best spot for what happened next.

Out of the blue, masked men arrived on horseback alongside the train for a gun slinging Wild West show. Outlaws, known as the Reynolds Raiders, took over the train in an old-fashioned robbery. They hold us up at gunpoint but after a furious (mock) fire fight, Métis hero Gabriel Dumont rescues us and recovers all the loose change we handed over during the hold-up. The battle is over – and we’re all happy to donate our coins to a local children’s charity.

The train stops in the village of Big Valley – population 364 – where a hearty home cooked, country meal awaits. Mouth-watering Alberta beef with all the trimmings. People who met for the first time on the train continue their conversations over supper. Afterward, as I board the train for the journey back to Stettler, I feel as if I’ve slipped back to a time when life moved at a slower pace. A time when community was everything, everybody knew their neighbours and sharing experiences and swapping stories was the favoured pastime.