An inveterate traveller, Jane has worked, played and stayed in cities and countries around the world. A writer by inclination and profession, her curiosity compels her to explore new cultures and adventures, sharing her impressions with the world at large. 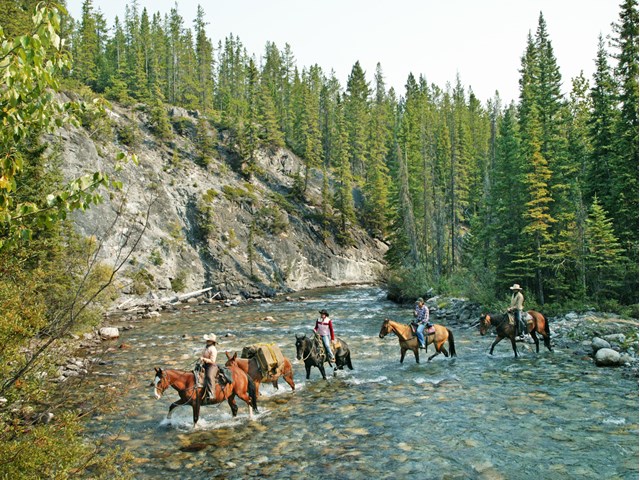 Plenty of Oscar worthy feature films have been shot in Alberta – The Revenant, Interstellar, Inception, Legends of the Fall, Unforgiven, The Assassination of Jesse James by the Coward Robert Ford and Brokeback Mountain, just to name drop a few. Put yourself in the scene on a self-guided road trip to some of the most famous locations – starting with Brokeback.

Nominated for eight Academy Awards in 2006, the film won Best Director (Ang Lee), Best Adapted Screenplay, and Best Original Score. The late Heath Ledger was nominated for Best Actor for his portrayal of Ennis Del Mar and the equally talented Jake Gyllenhaal got a nod for Best Supporting Actor for the role of Jack Twist.

The film was shot in the front ranges of the Canadian Rocky Mountains in Kananaskis Country and at various southern Alberta locations including the cities of Calgary, Fort Macleod and Lacombe, and small towns such as Seebe, Cowley, Crossfield and Irricana.

Here’s a scenic drive you can do from Calgary that will take you to some of the iconic Brokeback locations, with lots of interesting places to stop along the way – and I’ll throw in some other famous film spots just to mix it up. Saddle up!

This trip takes you into the natural wonders of Kananaskis Country, through the foothills and eastern slopes of the Canadian Rockies where many of Brokeback’s scenes were shot. You can easily make K-Country, as the locals call it, and its mountain town of Canmore a separate holiday destination, but here’s a simple circle tour that can be done in a day.

As you head west on the Trans-Canada (Hwy 1) consider that more than 20 standing movie sets in the province are located west of Calgary. The film sets have been built and maintained on private property for more than 40 western productions, including: Legends of the Fall, Lonesome Dove, Shanghai Noon, Open Range and The Assassination of Jesse James by the Coward Robert Ford.

About 20 km (12.5 mi) west of Calgary, turn south at Highway 22, known as the Cowboy Trail, and head for Bragg Creek. Stop at Elbow Falls in Bragg Creek Provincial Park, about 8 km (5 mi) west of the townsite on Highway 66. The fictional Brokeback Mountain is actually a composite of three mountain sites: the majestic Mount Lougheed near Canmore, and Fortress and Moose mountains in K-Country.

Moose Mountain, flanking the town of Canmore, is the one climbed by Ennis and Jack and their herd of sheep. You can stroll it yourself. As you come out of Bragg Creek on Highway 66, look for Paddy’s Flat Campground. Just past the sign you’ll find a dirt road that will take you 7 km (4.3 mi) halfway up the mountain, the most easterly of the Rockies near Calgary. The average hiker can do the round trip to the peak in about six hours.

Enjoy the Bragg Creek Walk, a pleasant, hour-long stroll from the provincial park into the town. The pathway connects the commercial and community centre of Bragg Creek with the surrounding natural world. With its connection to Kananaskis Country, Bragg Creek is an ideal hub for all outdoor activities.

Carry on south on the Cowboy Trail through the picturesque towns of Turner Valley, Black Diamond and Longview. Several ranches in the area play roles in Alberta movies, especially Open Range, which shot its cattle drive scenes on the Nicoll Ranch at Jumping Pound Creek and used the Turner and Hughes ranches, both southwest of Longview.

Head west from Longview on Highway 541, a route that becomes Highway 40, taking you through the heart of Kananaskis Country. For another hour, you’ll pass through the spectacular beauty of four contiguous provincial parks – Peter Lougheed, Spray Valley and Bow Valley Wildland on the left and Elbow-Sheep Wildland on the right. Watch for wildlife along this route; grizzlies and bighorn sheep can be spotted roaming the hillsides.

At the Peter Lougheed Provincial Park Visitors Centre, you’ll find the trail to Lower and Upper Kananaskis lakes. It is on the shore of Upper Kananaskis Lake where Jack tells Ennis in Brokeback Mountain, “I wish I knew how to quit you.”

Continue north on Highway 40 and rejoin the Trans-Canada Highway at Seebe, about 15 minutes east of Canmore. Nearby are the cliffs from which Ennis and Jack jumped into the river. To get there from the Trans-Canada, take Seebe Exit 114A, pass by the Leaving Park sign, cross the bridge and take a hard right to the first gate. From here, walk slightly more than a kilometre (about three-quarters of a mile) through Seebe to a second gate, and walk 200 m (656 ft) to the top of the hill, cross the Texas gate and turn left. Pass the two orange posts and follow the road to the left down to the Bow River.

Back at your vehicle, you can choose to continue west on the Trans-Canada to the town of Canmore, the heartbeat of K-Country with all the modern conveniences, shopping, and some outstanding eateries. Or head east back to Calgary, 102 km (63 mi).