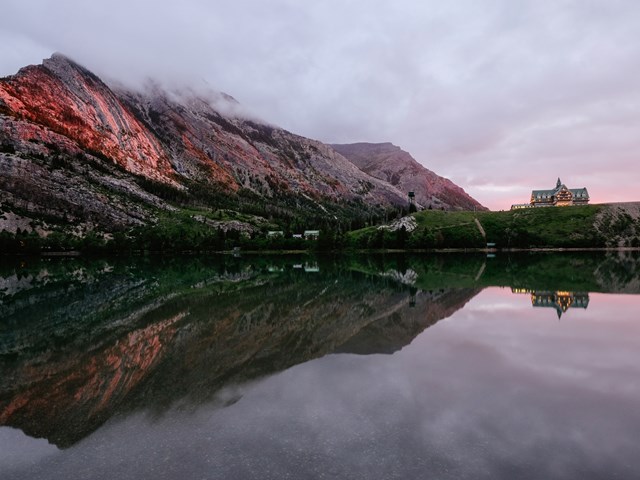 We’re perched on a hill overlooking Upper Waterton Lake, sipping afternoon tea inside the majestic Prince of Wales Hotel and feeling deliciously royal. A waitress in a red tartan kilt brings more Earl Grey as we nibble on scones, cucumber sandwiches and chocolate strawberries. Outside the massive glass windows where the Canadian Rocky Mountains thrust upwards from the shores, two seagulls ride the winds.

Our view of the lake changes swiftly as the sun punches through giant clouds, turning the dark water brighter. A tour boat pushes through waves near shore and windsurfers skip over white-capped ripples. Here in Waterton Lakes National Park in the southwest corner of Alberta bordering Glacier Mountain Park in Montana, the views are magnificent. This seven-story hotel, which opened in 1927 and is now a National Historic Site, provides one of the best.

We’ve been to the park several times and have experienced it from many angles while hiking, boating, kayaking, biking, strolling and wildlife watching. The hotel looms over the lake and Waterton village from its vantage point on the bluff, a much-photographed landmark that can be seen from almost everywhere. It’s just one of the reasons it was on our bucket list when we first visited for a weekend getaway.

Aside from using the 86-room hotel as a launching pad for outdoor wilderness adventures, history buffs like us appreciate its storied past. Even the Traditional Afternoon Tea is a fun nod to the Brits. Named after the popular Prince of Wales, the hotel was built during the golden age of railways in Canada and the United States.

When we ventured outside after tea, the winds were so strong we held our arms out, laughing, feeling ready to take off like the seagulls. The hotel was built during hurricane-force winds so fierce that they pushed it slightly off its foundations. Large cables installed through the hotel and into the bluff now enable it to withstand the strongest of gales.

The Great Northern Railway had created a chain of hotels resembling Swiss chalets and the Prince of Wales Hotel was one of the last. Mule teams transported some of the building materials that comprise the timber-frame interior, peaked roofs and gables. Then tourists came by train to try horse-riding tours and tour the lake in a 250-passenger boat called the M.V. International.

Then as now, the Prince of Wales Hotel provided a luxurious foothold in the mountains. You can still take boat tours on Upper Waterton Lake, as well as explore wildflower meadows and wooded trails by horseback with guides such as Alpine Stables. Snow-capped mountains, rushing streams, flowered meadows and wildlife such as elk, deer and black bear surround the Waterton township, with its quaint main street of small eateries and shops.

For the last afternoon of our trip, we tried one of the park’s many hikes. Starting at the Bertha Falls trailhead, our moderate 45-minute trek provided scenic views of the lake, including the stately Prince of Wales Hotel. We ended at the waterfall with mist beading on our shining faces, a perfect end to our trip – and only a two-and-a-half hour drive south from Calgary.