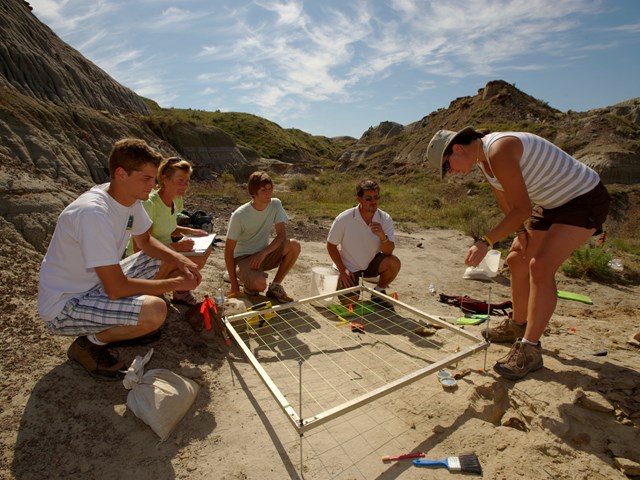 “Awesome! Look at all those bones!”

Normally, no parent wants to hear their child gleefully yell these words. But when you’re on a fossil hunt in Dinosaur Provincial Park, they’re dinosaur bones – and “awesome” about sums it up. This park, in the heart of the Canadian Badlands, contains the highest concentration of cretaceous fossils in the world, which is the primary reason it was designated a UNESCO World Heritage Site in 1979.

I’ve seen lots of dinosaur fossils at the Royal Tyrrell Museum in Drumheller. I thought scientists toiled for days at dig sites in the sweltering Badlands to find a few bones. But here’s the not-so-secret news: millions of fossils are lying around with nothing more than a keen eye needed to find them.

Less than 10 per cent of the 80 sq. km (30 sq. mi) park is open to the public. The rest is a restricted Nature Preserve and tours with a park interpreter are the only way to see it. Whether you’re new to the park or have been many times, I recommend taking a guided tour to see the best bone beds.

A short bus ride takes us into the preserve for the two-hour family friendly Fossil Safari. After a show-and-tell and a few rules from our guide, (don’t take the fossils!), we scattered to make our own prehistoric discoveries. This is the real deal. Fossils are everywhere, exposed by the erosion of millennia. We found teeth, bones, turtle shells and coprolite (fossilized dino poo.)

I’ve tented in many of Alberta’s campgrounds and have come to realize that I need my creature comforts, like a warm shower in the morning and sheets and pillows on my inflatable bed. Dinosaur Provincial Park has gone one step further with what’s known as comfort camping. Wooden shelters house large canvas tents complete with a wooden floor, double bed, pull-out futon, linens, dishes, electricity and a small fridge. All I have to do is bring our own bedding and soon I’m enjoying the view from our own private deck as I fire up the site’s barbecue.