PADDLE BACK THROUGH TIME IN A VOYAGEUR CANOE 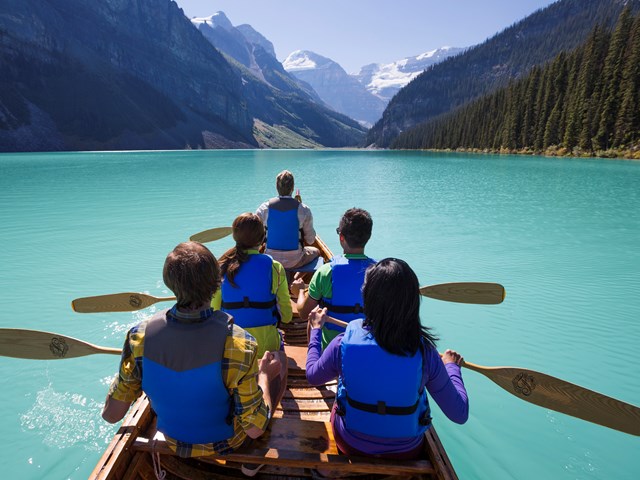 Canoeing holidays are a Canadian rite of passage. Fur traders helped map Canada as early as the 1600s, as they explored the rivers and lakes in what’s known today as the Canadian Rocky Mountains.

My wife and I knew this trip would be as Canadian as it gets. It was on our bucket list as a must-do history adventure. The 90-minute guided Voyageur Canoe Tour offered by Banff Adventures and supplied by The Banff Canoe Club is literally hands-on. It let us dig into history with paddles.

Before we strolled to the Bow River dock that is just a few minutes from Banff Avenue, we indulged in a tasty Canadian treat known as a Beaver Tail – a fried pastry served with a piping hot topping. Telling ourselves it was for the energy, we chose chocolate banana.

The Men of the Fur Trade

The Voyageurs were French Canadians who travelled by canoe, trading goods such as blankets and flour for furs from the 17th to 19th centuries. No pastries for them. We learned they ate pemmican – thinly sliced strips of dried buffalo meat – for energy to help haul heavy bales of fur and portage canoes over rugged terrain.

First Nations who used canoes as water transport showed the Voyageurs how to make them by stretching birch bark over white cedar – light but sturdy.

We were surprised our roomy, 14-passenger, 10.3 m canoe was so stable. This replica is similar in size to the canoes Voyageurs used when paddling on lakes. A slightly smaller one was used on inland rivers.

Our guide looks the part of a Voyageur in a white, loose-fitting shirt over leggings with a sash cinched near the waist. Freedom of movement allows him to manoeuvre without difficulty. We wore comfortable clothing as well, which was wise given the treats we’d eaten earlier.

He instructed our group how to do the Voyageurs’ salute - paddles up and high – and explained tips on canoe safety and paddling. Once we got out onto the calm Bow River, we felt a sense of what these men would have experienced so very long ago. The aroma of the sun on the pines and the soft rush of water beneath the canoe’s bow silenced our chatter.

All each of us had to carry was a lightweight life jacket and a paddle, dipping our paddles now and then while the sun warmed our faces. We were reminded how lucky we were compared to Voyageurs who had braved harsh temperatures and lugged heavy bales throughout the year.

As our guide explained how Voyageurs navigated waterways to trade and to establish commercial outposts in Western Canada, someone would spot another bald eagle flying near shore and let out a whoop. The most strenuous part of our journey was craning our necks to see all of the wildlife in the sky and on riverbanks.

We saw osprey flying to and from their nests, a few bald eagles and some deer meandering near the shore. There were also riders navigating their horses on a nearby trail, so close that I could hear the clip-clop of hooves. On the right day, Canada’s national animal, the beaver, can be glimpsed from the canoe.

The Bow River winds through the mountains, its water turning colours from blues to greens. We were happily exploring wilderness, even if it wasn’t the threatening wilds of long ago. This tour is perfect for beginner and intermediate paddlers who want a fresh perspective and a look back in time in Banff National Park.