Her grade school report card said Joanne asks a lot of questions. She took that as a compliment and with family in tow, continues to ask as she travels the province in search of exciting adventures and interesting destinations. 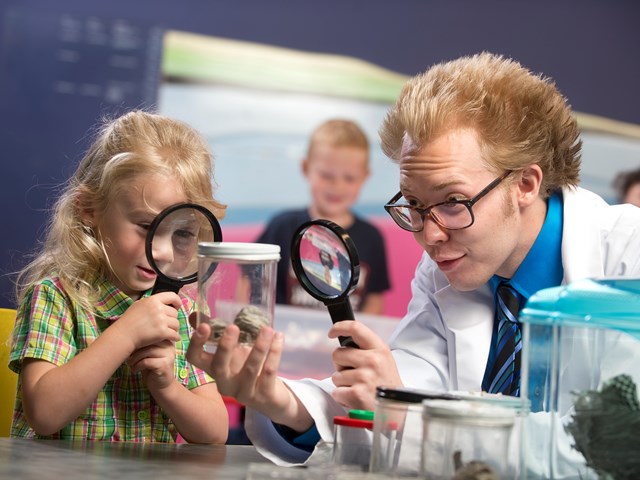 A century ago, locals used the thick sticky substance to waterproof their canoes. Today Fort McMurray is a vibrant city with an economy based on that same stuff. But the oil sands do much more than just patch canoes. The Oil Sands Discovery Centre and the Experience the Energy Tour let you unearth the history, science, technology and many valuable uses of petroleum products today.

How to Separate Oil from Sand

Explaining to our kids how energy companies extract oil from the biggest oil reserves in the world is not easy so we decided to take them on a weekend outing to Fort McMurray, four hours north of Edmonton. The first thing we did at the Oil Sands Discovery Centre was gather around an interpreter for a simple yet effective demonstration of how the oil is separated from the sand.

While she plugged in a kettle of water, a sample of real oil sands was passed around. Everyone touched the gritty substance. As she poured the hot water over the grit, the oil (bitumen) floated to the top. In another beaker was a sample of the tar-like bitumen akin to what was used on First Nations and voyageur fur trader canoes. It was so thick you could stand up a spoon in it.

She told us that after the bitumen is refined and synthesised, it can be used in different products, from vehicle fuel to medicine. She pointed to a boy chewing gum and said it’s even in his gum. In fact, thousands of items we use every day are petroleum by-products. I had no idea this list included items like footballs, life jackets, skis, shower curtains, yarn, umbrellas, guitar strings, purses, soft contact lenses, heart valves, toothpaste, telephones, lipstick – even perfume!

I’ve come to the conclusion that boys never grow up. Both the boys and the toys just get bigger. That realisation became clear in the Dr Karl A. Clark Exhibit Hall when I stood looking up at the big yellow 150 tonne heavy hauler truck (and I have no idea how they got that behemoth inside the building). Up in the cab was my husband – pretending to drive while the kids waited their turn.

Outside in the Industrial Equipment Garden and Bucketwheel Exhibit (not open in winter) you can’t miss Cyrus, an 850 tonne bucketwheel excavator used in the early days of oil sands mining. It’s one of the largest land based artefacts in the country – and makes the heavy hauler look like a child’s toy.

What I love about this place are all the interactive displays for hands-on learning. Finding out about viscosity and how molecules separate was interesting but mining for oil sands in a sand box using miniature diggers was a fun way for the kids to stay engaged.

Our visit to the Oil Sands Discover Centre laid the groundwork for seeing the mining and processing up close. A tour package offered by Fort McMurray Tourism and Suncor Energy makes that happen. The Experience the Energy tour is aimed at the curious, aged 12 and up, and is an entire weekend of learning. It includes two nights at a local hotel, entrance to the Oil Sands Discovery Centre and Fort McMurray’s Heritage Park and a personal guided tour of Suncor Energy’s Athabasca Oil Sands facility. Tomorrow, while we’ll learn more about the mining and refining processes, I’ll be keen to find out about the latest advancements and successes in reclaiming and protecting the surrounding boreal forest.

And yes, boys, more about the big trucks!