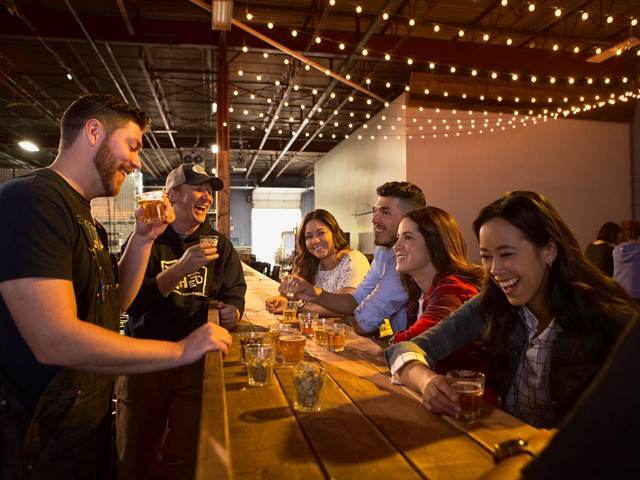 While taprooms and microbreweries have long been a staple in cities like Toronto and Vancouver, Calgary’s potential to incubate an industry of innovative, small-batch craft beer was stifled for years because of the existing rules around brewing.

“There were these crazy laws in place that said that in order to even apply to become a brewery, you had to show the Alberta government that you could brew at least 500,000 liters of beer per year,” Graham Sherman of Calgary’s Tool Shed Brewing Company explains. “Anybody who wanted to start a brewery here would come across this legislation and end up leaving to start their brewery in another province.”

To be sure, the odds were stacked against small brewers, who would have to invest millions of dollars into a startup business just to be eligible to apply to become a brewery.

Just a few years back, only a handful of trailblazing craft beer companies sat at the helm of Calgary’s budding craft beer industry, including Big Rock Brewery, Brewsters Brewing Company and Wild Rose Brewery. At the time, there appeared to be plenty of room for more brewers to take a leap into production, yet few were willing to take on the challenge of Alberta’s laws.

That is, until Sherman and his partner at Tool Shed Brewing, Jeff Orr, started lobbying the government for major changes to remove the red tape for small-batch brewers.

“We knew how important it was that we got these restrictive barriers broken down on the minimum production capacity for brewers,” Sherman says. “After a year of pushback, in December 2013, the AGLC [which oversees Alberta’s liquor and gaming industries] finally relented and changed those minimum brewing requirements. They honored us with a single tweet that day, ‘Congratulations Tool Shed,’ and we took it as a win.”

When Sherman and Orr started brewing together in 2012, there were about a dozen breweries in Alberta, while British Columbia was boasting around 120 breweries and Ontario was at 150.

With the floodgates officially wedged open, small breweries were finally able to flourish. The city soon began to see a flurry of beer-related activity from breweries like Last Best Brewing & Distilling and Village Brewery. Microbreweries continued to take advantage of the momentum — Calgary was thirsty for craft beer.

One such space, The Dandy Brewing Company, occupies a small lot in the southeast neighborhood of Ramsay. They have transformed their little pad of concrete and brick into an artistic, welcoming space for the community. In addition to the historic neighborhood of Inglewood, Ramsay has become a hub of beer and brewing-related activity.

“When we first started Dandy, the beer community was a pretty blank slate, at least to us as outsiders,” shares Benjamin Leon, co-owner of The Dandy Brewing Company. “As soon as we started to get our name out there, however, and began to meet people in the scene, we couldn’t believe how hard everyone in the industry was working to build a really strong community.”

Take a glimpse into any Calgary taproom on a Saturday night and you’re likely to see a full house. Beer tourism has sprung to life with ventures like Urban Pedal Tours, which features a 15-person bicycle that takes a two-hour spin around some of the city’s most hoppin’ brewpubs.

Russell Love, who handles marketing at Cask, explains that, “while we certainly didn’t pioneer the craft beer movement ourselves, we’ve been a small part of enabling success for many dozens of Albertan breweries by allowing them to affordably and efficiently package their liquid art in the world’s most sustainable beverage package — the aluminum can.”

Craft beer enthusiast and Calgary local Chantal Padavattan says that “there is a genuine community feel to the craft beer scene that is rooted in our values as Calgarians. As a city, we’re known for being welcoming, approachable and unpretentious. The beer scene mirrors this attitude, making craft breweries accessible for everyone, whether they’re a newbie beer drinker or an advanced brewmaster.”

The feeling of a “big small town,” as Padavattan points out, immediately comes to mind with would-be competitors doing their part to make sure everyone succeeds.

With new breweries opening up monthly, beer aficionados can hardly keep up with their tasting notes, while small-batch brewers are simultaneously hurrying to fulfill orders and keep their taps flowing. While it is unknown how many breweries a city of one million can sustain, one thing is for certain, the beer in Calgary is very, very fresh.