HIKING, HISTORY AND HUNTING FOR DINOSAURS 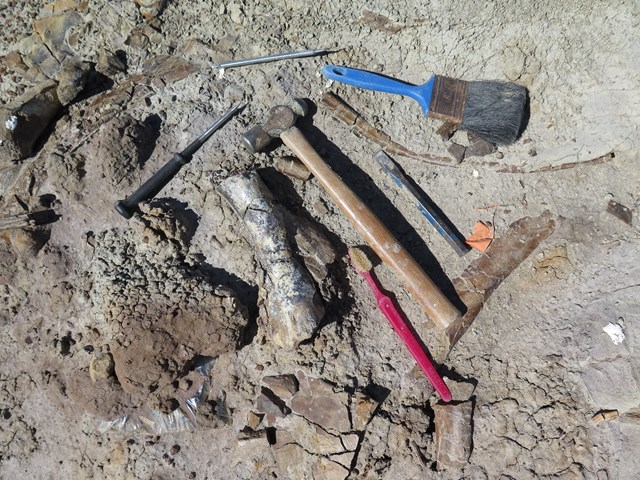 Overcast skies, cool temperatures and light rain weren’t enough to deter 18 intrepid explorers from setting off on an adventure in Dry Island Buffalo Jump Provincial Park. Lucky for us, the rain let up almost as soon as we arrived. A good thing, because we wouldn’t have been able to proceed – once wet, the clay-like soil here turns into a slippery mess better suited for a mud-slide contest.

A short 1.5 hour drive from Calgary, the park got its name because of a flat-topped mesa that rises 130 m (427 ft) above the Red Deer River. For 3,000 years, the Plains Indians drove buffalo over the edge of this plateau to their deaths, providing their people with everything they needed to survive in this rugged environment.

More recently, this area on the northeastern edge of the Canadian Badlands became famous as the site of a new discovery: Albertosaurus, a slightly smaller cousin of Tyrannosaurus rex. The prolific bonebeds were first found by Barnum Brown – who earlier had discovered T-rex – at the turn of the 20th century. But his camp was lost for more than 90 years until rediscovered in 1997 by world-famous palaeontologist and co-founder of the Royall Tyrrell Museum, Dr. Philip Currie, who just happened to be our guide for the day!

Phil regaled us with the tale of how he and a team of scientists set out to find Brown’s original camp, armed with only three old photographs as clues. After floating in on the Red Deer River and hiking into the park in broiling 42˚C (107˚F) temperatures, they were not having much luck. Running short of supplies on the final day, the rest of the team gave Phil the last of the water and turned back.

Suffering from heat exhaustion, legs cramping up on the last descent he had the power to make, he managed to stumble upon Brown’s site. This discovery become the basis of Phil’s theory that contrary to common belief, carnivorous dinosaurs were not solitary predators, but were social creatures, living and hunting in packs.

Currie went on to explain that from Dry Island Buffalo Jump downstream 209 km (130 mi) to Dinosaur Provincial Park lies the greatest concentration of dinosaur bones on the planet.

With Phil in the lead, we hiked in approximately 3 km (2 mi) through grasslands dotted with prairie wildflowers, brush and stands of mixed forest.

We scrambled up and down steep coulees and over and around muddy creek beds, and finally made it to Brown’s original campsite. Looking at the scene that famed predecessors Barnum Brown and Philip Currie once saw, we could feel the same elation. Definitely a bucket list moment.