GLIDE TO THE TOP OF THE WORLD 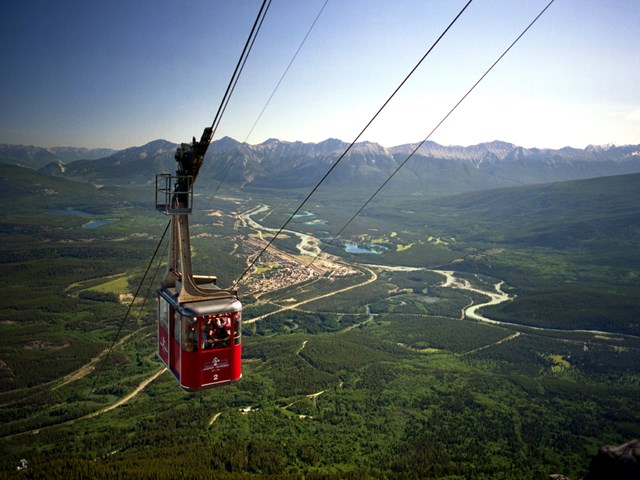 I’ve ridden on all the gondolas that provide a bird’s eye view of the Canadian Rocky Mountains in Alberta – except for one. As the highest and the longest gondola ride in Canada, the Jasper SkyTram would be the last to cross off my bucket list.

For my visiting mother, this was a once-in-a-lifetime experience that would provide her with memorable photos and lively dinner party chatter. By the time we reached the top, though, we were both speechless.

Panoramic views of Jasper National Park were the pay-off after the seven-minute ride up Whistler’s Mountain to the Upper Station at 2,277 m. We chose to stroll five minutes along the boardwalk leading away from the station until we got to the more intermediate main trail that continued up the mountain.

Within minutes we were breathless, but not from the additional 10-minute hike on the path, which you can venture out from by walking over bare rock. It was the alpine glory that lay spread out beneath us, the green valleys and towering mountains that seemed to stretch forever under an endless blue sky, and the toy-sized town of Jasper tucked at our feet.

While I thought I’d seen it all on gondolas – and I’d done my fair share of moderate trekking – the vast reach atop Whistler’s Mountain overshadowed all. We got a 360-degree view of forest, waterways and mountain peaks. On this virtually clear day in early October, we could even see the tip of Mt. Robson, the highest peak in the Canadian Rockies at 3,954 m in the nearby province of British Columbia.

The SkyTram gondola ascends at 6 m per second. The gondola cars can accommodate 27 people but we had one almost to ourselves. We watched a confluence of three valleys unfold as we glided above six mountain ranges, the Athabasca River winding like a silver ribbon below.

The gondola is easily accessible by car or shuttle in a 10-minute drive from the town of Jasper, where we stayed for several days. We started at the Lower Station, just steps from the parking lot. There is a booth there for buying tickets and a gift shop with clothing, snacks and other useful items. There is also a gift shop at the Upper Station.

Bring your camera to capture the views, a water bottle to stay hydrated, sunscreen and some insect repellent, though there were no insects when we were there in the autumn.

Moose, elk and black bears can sometimes be glimpsed on the way up the mountain. At the top you might see ptarmigan, marmots and ground squirrels, though on this day all we saw were some cheeky chipmunks. After hiking a bit more and taking way too many photos, we rewarded ourselves with hot chocolate and grilled cheese sandwiches at the Upper Station restaurant.

I find gondolas an easy and affordable way to soar into the mountains. Other aerial lifts in the mountains of Alberta include the Banff Gondola and the Lake Louise Gondola, both in Banff National Park.

In the town of Banff, the Banff Gondola rises to 2,281 m up Sulphur Mountain. There are a variety of short hikes at the top and an observation deck. Near the hamlet of Lake Louise, the Lake Louise Gondola offers views at 2,088 m with hiking and a strong possibility of glimpsing a grizzly bear on the way up.