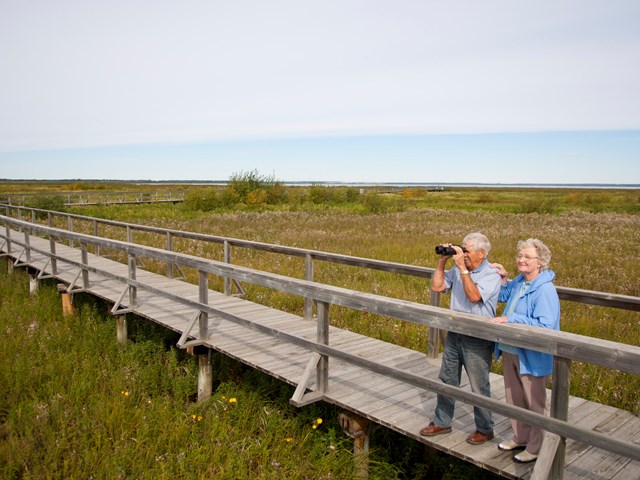 Majestic elk, moose, bison, bighorn sheep and mountain goats, cougars and wolves, grizzly and black bears – these are Alberta’s wildlife icons that fill our storybooks and our imaginations. But they aren’t alone.

More than 250 provincial parks and recreation areas and five national parks in Canada protect 587 species of mammals, birds and fish. Across the province, wildlife inhabits every forest, field, alpine meadow and wetland, and is easily accessed from our cities perched on the edge of nature.

On one walk on the Cline River trail, about an hour west of Red Deer, I walked slightly ahead of my niece and her friends. Wandering through spruce forest, a creek trickled up ahead. Stopping in my tracks, I raised my arm high to alert the girls of my discovery. At the water’s edge, a little porcupine sat, head tilted, delicately taking a drink. From a distance, we watched his quills bristle and his body nearly double in size. Then with a quick flap of his tail he waddled slowly up the creek bank to disappear behind the willows. We were mesmerized.

Planning can be Fruitful

While some sightings are lucky surprises, spotting wildlife can also be the fruit of good planning. Our family has marvelled at the sight of tiny long-toed salamanders parading across the road in the dark of night on their migration to Linnet Lake in Waterton National Park. Driving through the rolling prairies surrounding Brooks and nearby Dinosaur Provincial Park, we’ve been amazed by pronghorn antelope grazing on tall golden grasses and bounding across the open range. Thirty-minutes east of Edmonton, in Elk Island National Park, we’ve studied herds of massive bison roaming freely amidst aspen parkland, one of the most endangered habitats in Canada. That’s where we also experienced the thrill of watching a pair of trumpeter swans gliding across Astotin Lake in a park that boasts 250 species of birds.

Learning an animal’s favourite food or habitat has improved our viewing success. The best times of day to spot wildlife are early morning and at dusk, particularly along the riverbanks. Knowing that coyotes like to hunt mice in open meadows running parallel to roadways has yielded sightings from rest stops. And while seeing bighorn sheep licking salt off the pavement is almost guaranteed on the Lake Minnewanka Road near Banff, shaggy white mountain goats are far less comfortable around humans. With their preferred treat being sulphurous shale or glacial silt, we’ve spotted them from a distance at Goats and Glaciers Viewpoint, just south of Jasper on the Icefields Parkway, perched high up on the cliff faces.