DISCOVER THE LAND OF THE DINOSAUR 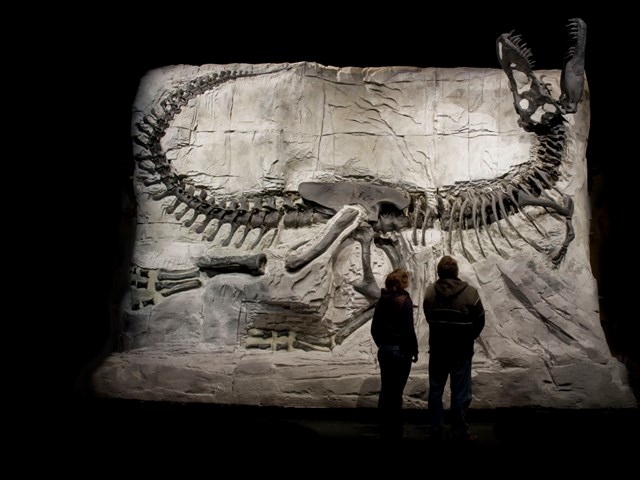 Explore where dinosaurs roamed in Alberta over 65 million years ago. The Fossil Trail is a diagonal path through the province that encompasses the richest bonebeds and greatest diversity of fossils in the world. It stretches 2,500 km, from Pipestone Creek near Grande Prairie, south-east to Devil’s Coulee near Warner. Here are four highlights to discover:

A world leader in palaeontology, the Royal Tyrrell Museum of Palaeontology provides a great starting point for understanding how the dinosaurs lived and why they became extinct. It’s easy to spend an entire day here exploring the various exhibits and watching students working on specimens in the labs. Scientists travel across the globe to study the museum’s collection of 157,000 individual specimens – there are just 50 on display to the public.

Although dinosaurs roamed all over Alberta, Dinosaur Provincial Park, a UNESCO World Heritage Site in south-eastern Alberta, is the epicentre of fossil finds. So what does it take to find the next big dinosaur discovery? Find out on the Fossil Prospecting Hike. This six-hour journey through the park’s stunning landscapes leads the intrepid on a hunt for dinosaur remains. An expert guide will show you the secrets of where to look and what to look for. Though no digging is involved (and you can’t take home what you may find), you’re guaranteed to see something cool.

In northwest Alberta, one of the world’s top five richest bonebeds is located just south of Grande Prairie. On a bluff above Pipestone Creek lies a massive grave site of pachyrhinosaurs – horned, plant-eating dinosaurs that lived 73 million years ago.

The nearby Philip J. Currie Dinosaur Museum, named after Canada’s leading palaeontologist and co-founder of the Royal Tyrrell, opened in September 2015 and features public galleries, research and collection facilities and educational programming. Dino hounds can take part in the full-day Field Experience during the summer. Learn to make a cast in the Paleo Lab, take a tour out to the bonebeds and then come back to do related activities once the casts have set.

Everyone loves baby animals, so imagine the fuss when the fossilized remains of dinosaur babies and their eggs were discovered at Devil’s Coulee in southern Alberta in 1987. Two-hour site tours take budding palaeontologists onto windswept bluffs and up and down coulees to the original nesting site. While you search for fossils, your guides will explain the importance of the find: the discovery proved for the first time that groups of these creatures came together to nest and raise their young, revealing a social rather than solitary nature.