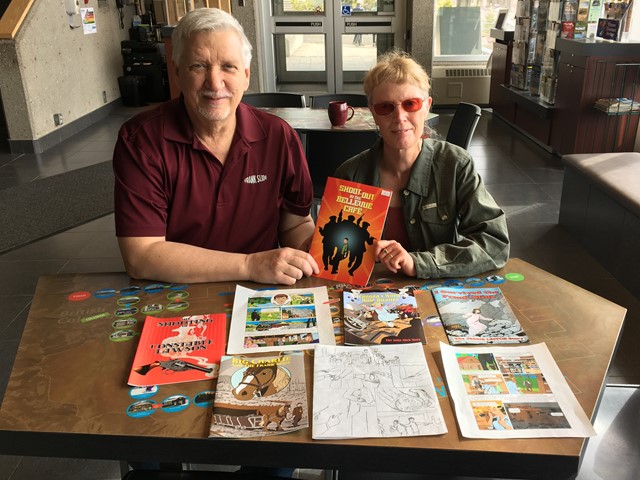 Did you read Classic Comics when you were a kid? I did. I didn’t just read them; I devoured them.

Classic Comics were thicker, more expensive and a bit less colourful than the super hero comics of the day. They featured adaptations of literary classics such as Moby Dick, Hamlet, and The Iliad. Created by Albert Kanter, the series began publication in 1941. Six years later, the name changed to Classics Illustrated.

If only I’d kept my Classic Comics—they’d be worth a fortune. And hey, I’d love to reread them.

One day, while looking at Legacy magazine, I spotted an article describing a comic book that told the tale of the westward march of the North-West Mounted Police. Fort Whoop-up had commissioned the work, and hired an artist who drew for DC Comics. The result, intriguing, reminded me of the Classic Comics of old.

Curious, I did some sleuthing and learned that the artist, Claude St. Aubin, wasn’t from New York, or another far-away place. He lived in Raymond, Alberta.

I visited Claude, pitching the idea of using comics to tell the dramatic and tumultuous history of Crowsnest Pass. He embraced the concept, and a series of colorful comics was born.

Five comics have been produced, and all use a child, children, or an animal to tell the story in 16 action-packed pages. This approach—short and sweet—targets the intended audience (kids).

The historical background for each comic is researched. This includes details about the events; such as when and where they took place, and the looks and ages of the primary personalities. A script then adds depth to each scene. Stick figures are added to sequence the picture-by-picture relay of the story.

Claude, using the draft, complete with historical images (people, buildings, clothing, and key scenes), brings life to the unfolding drama. He crafts images accurately and artfully, drawing the covers and pages in pencil.

Claude’s work is edited before he completes the final pages in ink, adding color to the covers.

The final steps: color is added to the pages, and the edited text is incorporated at the Frank Slide Interpretive Centre.

The comics are a huge hit with children - and adults, who want a quick—and classy—story.