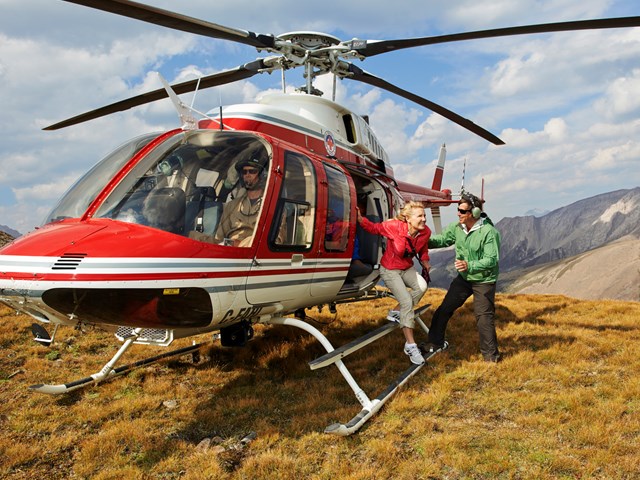 I’ve flown on many of the various scenic helicopter tours available in Alberta. Shorter, guided tours usually run anywhere from six to 20 minutes and can climb up to 3,000 m (10,000 ft), depending on the operator and the route. Some longer scenic tours reach higher elevations and can last an hour.

For many, this Canadian Rockies adventure tops the bucket list, especially if you’re planning to shoot photos or video. The bird’s-eye view of a heli-tour makes me feel wildly free.

Quicker heli-tours provide advantages, I’ve learned. If you’ve never flown in a helicopter before, these aerial jaunts are a great way to start. You’ll get a taste of jagged peaks, emerald valleys and – depending on the season –meadows carpeted in wildflowers that truly bring our mountain parks into perspective.

There are several short heli-tours based in and around the town of Canmore in Kananaskis Country. Here are a few that run 20 minutes and under.

The Three Sisters are three landmark peaks that are among the most photographed vistas in the Canadian Rockies. Individually named Hope, Charity and Faith, they are about 2,962 m (9,700 ft) above sea level. Alpine Helicopters in Canmore does a 12-minute tour of the peaks that the pilot narrates with a lot of historical and geographical background.

You can see the Three Sisters on the way and returning to the heliport. The helicopter rises over the Bow River, which starts as glacial melt water from the Bow Glacier just north of Lake Louise in Banff National Park and flows east through Calgary. Looking to the right you’ll see Canmore, which the pilot will explain began as a coal-mining town in the 1880s and a Canadian Pacific Railway stop.

Bring your long range lenses for a chance at photographing wildlife you may see below, particularly in Wind Pass, a corridor for big horn sheep. The Pass is one of many highlights your pilot will point out.

Explore the Rockies and Summit Tours

Rockies Heli Canada’s Kananaskis location is at the intersection of Highways 1 and 40 near Canmore. It offers a 20-minute Explore the Rockies heli-tour and a shorter version, the 12-minute Summit heli-tour, among others. Both enter the front ranges of the Rockies in where the mountains seem to rise straight up out of the ground. Included are great views of foothills and prairies, along with a history and geography lesson stretching back to the Ice Age.

What to Expect in a Helicopter

You’ll need to crouch slightly and keep your head low to get to the helicopter, staying away from the blades that rotate at the top. You’ll get a microphone and earpiece headset so you can communicate with the pilot, as the helicopter will be loud, even while you’re inside it. Once you are buckled into your seat you will soon feel the steady thrum of the aircraft with your feet.

You’re usually in a helicopter that has five to seven seats. One person rides up front beside the pilot and the others are behind. While all of the seats provide views, in my experience the seat beside the pilot is the best vantage point for camera buffs and otherwise.