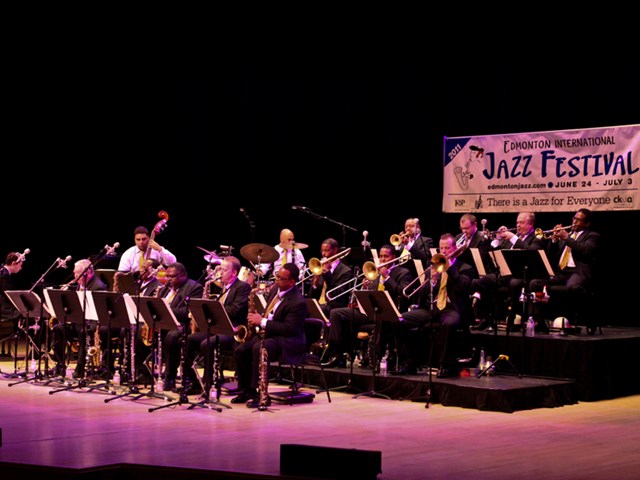 Combine big city sophistication with small town friendliness and accessibility and the stage is set. For music lovers who want to get up close and personal with musicians while enjoying venues both large and small, you get the best of both worlds at Alberta’s jazz and blues festivals.

The weeklong music festival in this southeastern Alberta city brings traditional and modern jazz together with a handful of blues acts. One year, I grooved to Kool Ray and the Hip Katz at the festival at the downtown parkade during a dance party that had everyone up and moving. Behind the band, the sun lit the cliffs along the scenic South Saskatchewan River. The guy beside me gave me some helpful tips on other outdoor jazz venues in town. He was a local father sporting a Jazz Fest t-shirt and he’d brought his family. Nearby, the kids danced alongside the adults.

This small, four-day festival anchored by the Lethbridge Jazz Society shines the spotlight on music students as well as bringing in talent that ranges from jazz to gospel to blues.

It started with a small group of musicians and has bloomed into a weeklong, volunteer-driven event that draws major talent to concert venues such as the Winspear Centre. Edmonton has a diverse music scene with internationally recognized artists including swing and improvisational saxophonist P. J. Perry.

The jazz scene in Calgary has been staged in various festivals under different names and has been reborn as JazzYYC. This artists’ collective is the driving force behind three mini-festivals held throughout the year.

The JazzYYC Summer Festival is a four-day celebration in June. One of the main venues is the Ironwood Stage and Grill in the community of Inglewood, near downtown. There are new shops and eateries and the neighbourhood is fun to explore.

There is a four-day mini-festival in November held as the Canadian Jazz Festival, featuring touring Canadian artists. Annually on April 30 during United Nations International Jazz Day, visitors can see free jazz shows staged around the city.

Blues lovers flock to this festival for three days in late August at the Heritage Amphitheatre in Hawrelak Park. Expect a diverse range of guitarists, piano players, harmonica players and singers. For local flavour, hit venues such as Blues On Whyte in the city’s legendary Commercial Hotel.

The four-day Calgary International Blues Festival traditionally runs at the end of July at Shaw Millennium Park. Find local blues at near-downtown venues such as The Blues Can and Mikey’s Juke Joint. The festival draws major blues talent from around the world.

For a week in February, the Calgary MidWinter Bluesfest offers workshops, emerging artists and a headliner concert.