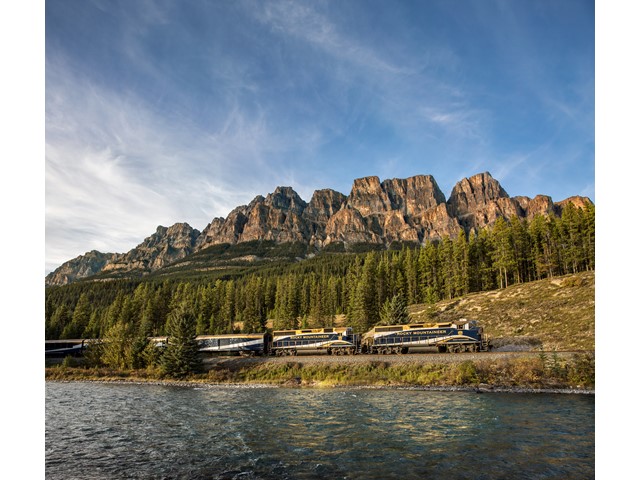 First Passage to the West

What makes a perfect vacation? A chance to relax, of course. Stunning scenery, certainly. But there's usually another essential in the equation: The opportunity to experience something extraordinary and thought-provoking that changes you forever.

A rail trip through Western Canada on Rocky Mountaineer delivers all three. Luxurious coaches and elegant five-star dining make it impossible not to unwind. The panoramic views, especially from the train's glass-domed coaches, show off a land so rich in beauty it takes your breath away. That land is also incredibly rich in history, from the Ice Age to the Gold Rush, which makes the getaway unlike any other. Traveling by train enhances your experience, providing a fresh and unique perspective -- and the feeling that you're truly taking the trip of a lifetime.

Because Rocky Mountaineer travels only by day, you won't miss a second as hosts regale you with details of a dramatic past and charm you with fascinating historical facts. That helps create a convivial atmosphere on board, and the shared awe and wonder foster new friendships, further solidifying the trip as a special one.

Ready to make history of your own? Here's a preview of some historical gems you'll encounter on a Rocky Mountaineer journey.

1. The town that "Gassy Jack" built
In Wild West days, Vancouver, British Columbia, was a mill town devoid of alcohol. Until an enterprising extrovert named "Gassy Jack" Deighton arrived, that is. He promised workers he'd provide drinks on the house if they built him a saloon — which they did in one day. Today, all of Rocky Mountaineer's routes offer a few days in Vancouver, where you can toast Deighton and your voyage in the city's Gastown quarter, now known for its chic watering holes and restaurants.

2. History is all around you, even underfoot
Rocky Mountaineer named their most popular route “First Passage to the West” for a reason. The same tracks that will carry you through Western Canada were laid by some 15,000 "navvies" in the 1800s — a term first used for canal builders or navigators before being applied to railway laborers. As you roll through the beautiful but brutal terrain, you'll appreciate what an arduous undertaking it was. Then, celebrate when you see the last spike, in Craigellachie, British Columbia, which completed the transcontinental railroad joining Eastern Canada with the West and finally united the country.

3. Spiral Tunnels across the Continental Divide
Among the most grueling undertakings for the railway system's crews were the Spiral Tunnels. It took two years, 1,000 men and 75 boxcars of dynamite to blast through mountain terrain and join two sections of track across the Continental Divide. It was a stunning engineering feat back in the 19th century, and today the swooping curves of the tunnels will still thrill and enchant you and your fellow Rocky Mountaineer travelers.

4. Fraser Canyon: 10,000 years of human history
On the breathtaking route along Fraser Canyon, Rocky Mountaineer hostshelp you imagine what it was like during the Ice Age when glaciers covered the land. You'll then picture the Stó:lō and the St'at'imc peoples, who settled there in the Holocene epoch after the ice retreated. And finally, consider how things changed when miners arrived following the California Gold Rush, hoping for one last chance to strike it rich.

5. Gold Pan City
The Gold Rush days really come alive, however, on Rocky Mountaineer's "Rainforest to Gold Rush" route, and especially along the Cariboo Wagon Road, where miners traveled with their mules and pack horses. You'll also stay overnight in Quesnel, known as Gold Pan City. There you can still see the façade of an old Hudson's Bay trading post, built in 1867, where miners would trade with fur trappers who brought pelts in by canoe.

6. Living witnesses to the ancient past
You'll marvel at the elegant beauty of old-growth forests that have stood witness to centuries of history. In the Monashee Mountains of British Columbia, for example, giant cedars more than 500 years old climb into the sky. Farther east, in Jasper and Banff, onboard hosts can help you identify living spruce and Douglas firs that predate Columbus.

7. Lake Louise: Legacy of the Ice Age
The exquisite turquoise blue of Lake Louise and its neighboring glacier-fed lakes is a sight to behold. Billions of particles from glacial erosion suspended in the water create that impossibly gorgeous shade. The particles, called "rock flour," reflect short-wavelength blues and greens when light hits them, making an already magical experience even more so.

8. Sasquatch sightings
Since ancient times, First Nations peoples of Western Canada have made carvings and masks depicting a half-man, half-beast they called Sasquatch. Could those blurry Bigfoot videos you've seen be real? Might you actually catch a glimpse of the legend as the train rolls past a mountain forest? Well, maybe. But regardless of whether Sasquatch exists, have your camera ready to capture all the amazing history along the way and your newfound place in it.